View source
watch 02:34
Fire Emblem Warriors: Three Hopes - The Loop
Do you like this video?
Play Sound
For other uses, see Juan (disambiguation).

He is considered the world's most notorious narcotrafficker, who owns the island of Cayo Perico, one of the most secure private islands in the entire world, and uses it as the nerve center of his drug empire. He was also involved in turf wars and the disappearance of reporters, and is also supplier to the Madrazo Cartel. In Heist Prep: Gather Intel, El Rubio mentions that his grandfather ("Opa") was German.

The storage rooms and office in his compound contain many photographs on the walls showing him engaged in various activities, including:

There are also many vintage photographs of characters and scenes from Red Dead Redemption 2 including Andreas and other German characters, which, when combined with his statement about his Opa, indicate some likely ancestry.

El Rubio was first mentioned in the end of GTA Online: Los Santos Summer Special update, in a 10 second teaser for The Cayo Perico Heist update entitled "surveil.exe", which consisted of a digital surveillance file entitled the El Rubio Dossier. The 10 second teaser concluded with a view of the corpse of a John Doe on Vespucci Beach with the notation his last known visual contact was at LSIA and that his known affiliations include El Rubio.

Strickler is introduced by name when the player meets Miguel Madrazo at The Music Locker in 2020. Miguel claims he somehow managed to get hold of "decades' worth of intel" which he was threatening to take to the DEA unless the cartel renegotiate their drug supply prices.

Strickler is seen greeting the player, English Dave, and Keinemusik when they arrive at the island's airfield. After a short talk, the player is required to drive him and English Dave to the party, where he gets Scott Storch to read a pre-written sycophantic introduction speech before introducing Keinemusik to take over the DJ position. Later, while scoping out the island, the player witnesses Strickler ordering his guards to execute Gustavo for embarrassing him in front of his guests, by feeding him to his black panther. If the player returns to continue scoping out the island, Strickler can be found dancing in his seat at the beach party.

During the heist itself, Strickler resides in his secure compound and can be heard over the loudspeaker system berating his guards. Once he realized that his vault has been robbed, he mans the minigun of his Valkyrie MOD.0 to hunt for and attack the player. He will continuously taunt and insult the online protagonist via loudspeaker until they manage to escape the island. After the protagonist successfully retrieves the Madrazo files during the initial heist, Miguel remains in contact with Pavel and continues supplying information on Strickler's shipments and securities, allowing the protagonist to keep robbing Cayo Perico as they please.

“How do they keep doing this to me, huh?! One of you imbeciles must know something... Don't be afraid, you can come and tell me.”
— Juan Strickler to his guards.

During the subsequent heist playthroughs, Strickler can be heard ranting over the loudspeaker about being robbed, at one point implying that he had the majority of his original guards killed for their failure in stopping the players, and later confirmed by Pavel on phone messages after completing a heist replay, as he witnessed the murders on satellite images of the island. During these rants, he claims that he thinks one of his guards helped the robbers. [4]

While El Rubio doesn't physically appear in The Contract update, it's mentioned that Pavel has visited Franklin Clinton's Agency (offscreen) in 2021, looking for the GTA Online Protagonist, and asking when the protagonist is going to take "another trip to the Caribbean", confirming they are still occassionally robbing El Rubio's Compound to this date.

“Paranoid? Hahaha... you motherfuckers. How many times have we been robbed? Huh? Who's paranoid now?”
— Juan Strickler to his guards.

When in public, Strickler presents himself as a fun and generous philanthropist and attempts to maintain a good image. However, when alone, he is revealed to be vicious and ruthless. During The Cayo Perico Heist, he can be heard threatening his guards over the speakers on the island, oftentimes for minor things. Because of his brutality, he can be a very intimidating man, as seen during his conversation with Scott Storch.

Due to the countless robberies in his compound since 2020, Strickler has become extremely paranoid, and it has gotten to the point where he has stopped trusting his own employees and security guards, constantly ranting about their failure in stopping the players, and killing his own employees after suspecting they were helping the players rob him.

El Rubio's mugshot, with his PN number and fingerprints from the heist planning screen in the Kosatka.

El Rubio welcoming the tourists at the Cayo Perico Airstrip.

Overseeing the execution of Gustavo.

"Are we cool?", an obvious veiled threat to Scott Storch.

Manning the guns of his Valkyrie during the heist.

Overview of his fortified compound, a Speedo is on the far left, his Brioso 300 is right of center, and a Stafford is on the right.

El Rubio's mansion, located in the center of the compound.

Picture of El Rubio with 2 women at Richman Mansion enjoying the water.

Picture of El Rubio enjoying a party wearing a costume, behind him appears to be a Festival Bus.(Texture file)

Picture of El Rubio riding in a Caddy at Los Santos Golf Club.

Picture of El Rubio standing outside the Epsilon Program with an unknown younger man.

Picture of El Rubio fishing with an unknown woman off the back of a Galaxy Super Yacht or Dignity. 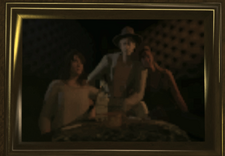 Picture of El Rubio with two women at a nightclub. 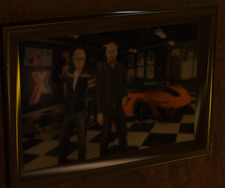 Picture of El Rubio with Simeon at Premium Deluxe Motorsport. 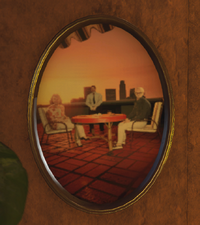 Picture of El Rubio having dinner with an elderly woman.

El Rubio's character background appears to be inspired by Carlos Lehder, due to his German ancestry and Colombian nationality and the linguistic combination of Spanish and German in his name, and owning a private island which serves as a drug-smuggling operation headquarters and party island.

His character and voice is similar to Scarface film protagonist Tony Montana, portrayed by Al Pacino; both characters are obsessed with wild cats (and both have one as pets) and valuable antiques (as shown in Scarface: The World Is Yours video game).

He also bears some resemblance to the late John McAfee, founder of McAfee Corporation, who has been the subject of paranoiac behavior and legal troubles over drug manufacturing, weapon possession, and murder during his residency in Belize in the early-2010s.

The literal translation of "El Rubio" is "The Blonde" in Spanish. His other nickname, "The Blond Colombian", also alludes to this.