View source
watch 02:56
Raise a Floppa - The Loop
Do you like this video?
Play Sound
For other uses, see Juan (disambiguation).
Definitive Edition

Robert Davi
“Tommy, my friend, you are not in Liberty now. Here, we do things differently.”
— Juan García Cortez in Mall Shootout.

Cortez is a retired colonel from an unknown Central American country, and the father of Mercedes Cortez.

Juan Cortez was born in Central America. During his time in his home country, he survived thirty coups and nine death sentences, always managing to survive and get promoted. Cortez has a disliking of the French, accusing them of hypocrisy for stealing from poor nations for centuries. During this time, Cortez married an unnamed woman and they had a daughter Mercedes, though his wife died some time prior to 1986. At some point, he became heavily involved in drug trafficking.

Cortez began his business interests in the United States by sending Gonzalez, his right hand man, as a representative in drug deals. Gonzalez stole some of Cortez's drugs to sell for a side profit, though he is more or less forgiven by Cortez and allied drug lord Ricardo Diaz (who threatens to kill Gonzalez if he does not begin to tell Diaz about Cortez's future drug deals in the city). Cortez moved from his home country to Vice City by 1986, where he mainly lived on a large yacht. GTA Vice City's promotional website reveals that he is officially a cultural attaché "encouraging trade and improving our standing" between their countries, providing him a cover for his drug operations. He tells his countrymen that while he would rather be at his vineyard celebrating with them, "it is my curse to live in luxury in the United States" because he is serving a patriotic duty. He also reveals that aside from his yacht, he has a luxury villa in Vice City that his people pay for. The police have bugged it, which is probably why he lives on his yacht, also saying later that the yacht allows him to quickly relocate if he gets in too much trouble. Cortez is allowed leniency with the law because of diplomatic immunity, and also enjoys eating endangered species (for example, shark or tapir snout), considering it fine living.

Cortez enjoyed throwing parties on his yacht, which attracted very famous football players, rock stars and even politicians. After organizing a seemingly routine drug deal between Forelli mob members and the Vance brothers, it was ambushed with both $2 million and 20 kilos of cocaine stolen. Cortez meets the Forellis' representative, Tommy Vercetti, at one of his parties and begins trying to track down the thief. They begin by killing Gonzalez, who had been telling too many people about the deal in the first place. He also recruits Vercetti's help to steal missile technology chips from the French government. Tommy meets Ricardo Diaz when he is sent to protect him, and later works for him as well, beginning to suspect that Diaz ambushed the deal.

When Cortez sees Tommy next, they share their suspicion that Diaz was responsible, though Cortez does not outright accuse Diaz because he considers him a "dangerous man". Cortez asks Tommy to steal a tank from a US military convoy and protect him from the French government while he takes his yacht out of the country. They say their goodbyes as close friends, Cortez giving Tommy a speedboat to return to shore, and asking him to look out for his daughter Mercedes.

A few weeks later, Cortez calls Tommy (who had since killed Diaz and Forelli to become a powerful drug baron in his own right) fearing that his daughter wants to become a lawyer, which would bring shame to their family. Tommy reassures him that she definitely did not want to be a lawyer, but does not inform him that she has become a pornographic actress or a rock groupie. In the same phone call, Cortez tells Tommy that he is in his home country and that the new minister of the interior (whose father Cortez killed in a failed coup) has arrived, so he needs to be polite to him. In another one of his phone calls, which was deleted from the game, Cortez tells Tommy that he fought in three revolutions, being promoted each time.

Has diplomatic immunity - bear this in mind when bugging his house. Has somehow survived up to 30 coups in his native country. Likes to eat endangered species. 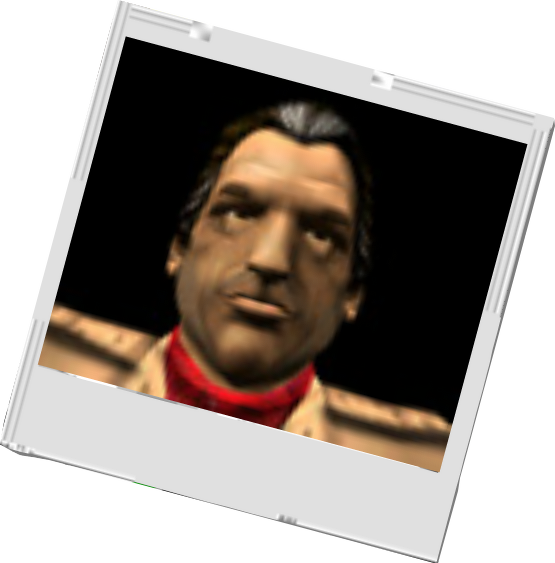 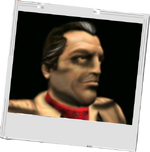 “To you, I am Colonel Juan Garcia Cortez. To my people, I am a hero. A patriot. My love for my country knows no bounds. I will give everything if that is what is asked of me. And if my people need me most in Vice City, promoting our needs, encouraging trade, and improving our standing, than that is where I will go for my people. Sometimes as I stand in the luxury villa my people pay for or relax at another party, I know I would rather be at home in the mountains waiting for the harvest to ripen, sharing a joke with my people. But that has not been my fortune. It is my curse to live in luxury in the United States in order to...”
— Colonel Cortez

Cortez in his boat.