View source
watch 02:56
Raise a Floppa - The Loop
Do you like this video?
Play Sound
For the radio station in Grand Theft Auto IV, see The Journey.

“A cross-country family vacation in an RV is an American rite of passage. Grab your spouse and the kids, and hit the road today in the Zirconium Journey. It will bring you all closer together, in a really dysfunctional, claustrophobic way. You won't end up despising each other, honest.”
— Warstock Cache & Carry description.

The Journey is based on a 1977 Itasca C25C Class C motorhome, given the squared-off cabin and simplistic grille shape with turn indicators below, though with stacked circular headlights.

The vehicle features a cab-over extension and a somewhat large cabin, similar to a Rancher. The accommodation area of the vehicle (the back) is well equipped with a furnished interior, which contains a red tiled floor, a sink, a table accompanied by two bench chairs found at most fast food restaurants, and some cabinets; other accessories include a ladder and a continental kit (spare tire) on the rear. The Journey also has a large flat roof, making for a great rampage platform. The only way to access the roof is to jump on the front end and make a second leap onto the top, as the ladder is unusable. Despite the large rear compartment and the access door on the passenger side, it is inaccessible; therefore, the Journey can only fit two people, both in the cab up front.

The vehicle is only available in a white color, with blue/yellow stripes on its sides. It shares the rims with the Elegant.

The Journey returns in Grand Theft Auto V and Grand Theft Auto Online as a Class A motorhome. Its design is inspired by that of the 1975 Vogue 26' Villa Grand (albeit with a shorter body), and the headlights and driver window also bear a likeness to the Fleetwood Bounder.

The Journey assumes a boxy design with slightly angled shapes on both ends and a rusty appearance, where the front features a large metal bumper with the license plate mounted on the left. Above the bumper, there are dual black grilles that span most of the vehicle's width, with the upper grille being twice as tall than the lower one. A set of square vertical headlights can be seen beside the upper grille, as well as square indicators beside the lower grille. The uppermost area of the front is mainly occupied by a dual windshield with black wipers, along with a small radio antenna on the far left of the windshield glass.

On the sides, the vehicle features dual marker lights on the front quarters and single units on the rear quarters, as well as small compartments and vented sections around the rear half. The front section has the corresponding access doors for the front occupants, a set of rear-view mirrors and large windows for the rear compartment, together with a tall access door, small handles and a side awning on the driver side. The roof area has numerous marker lights around the edges, small hatches/vents and a metal bar on the top, along with two cornets above the front section.

The rear end has a large central window on the upper area, a large compartment on the lower area and a set of rectangular tail lights beside it, each one consisting of outer main lights, inner brake lights and smaller reverse lights within the inner brake units. The rear bumper mounts a small rack in the center and a license plate on the passenger side. An optional ladder can also be seen on the driver side.

The vehicle's interior is much more unkempt than the one seen in GTA San Andreas and features some counters and cabinets, along with four seats in inverted orientations (usable by other players in GTA Online, albeit they simply warp directly to a seat). In the enhanced version, the Journey has a dedicated dial set that is essentially a brown/worn variation of the analog "Van" dial set, while the rear compartment is fully detailed, with a carpet, various posters of half-naked women, a bed that looks like that of Trevor's Trailer, a stove and a sink. A set of curtains can be seen either opened or closed.

The Journey primarily spawns in a grayish white primary color for the upper half of the sides and the frames of the side awning, along with a secondary color for most of the bodywork and in the form of upper side stripes passing through, adjacent to the primary color area. The lower side stripes adjacent to the secondary color area are actually determined by the wheel color, which is often of a white color. Although rare to find, the Journey can also spawn in an all-white color with red side stripes. It uses a set of plain industrial wheels with bolt details around the center.

The Journey, living up to its bulky size, is incredibly slow, but gains great speed going down hills. The acceleration is poor as are the brakes, but it is very sturdy and withstands a lot of ramming before giving out and exploding (for example, the one parked at the top of Mount Chiliad can survive the plunge off the top of the mountain without blowing up). The steering is also below-par and it tends to roll a lot.

Despite being heavy and bulky, the Journey has acceptable acceleration and handling, thanks to a torque-heavy diesel driving the front wheels, but only average top speed. Furthermore, while it can take damage, it is highly unsuitable as a getaway vehicle. It is prone to severe understeer at high speeds, likely owing to its heavy weight. It can also tip over and potentially land on the sides when steering heavily due to its high center gravity at medium-to-high speeds.

A compact singe-cam turbocharged V6 model can be seen under the van, though is easier to see using the Rockstar Editor Free Camera. Said engine is coupled to a 4-speed gearbox and powers the front wheels. It uses a relatively noisy engine, with a similar tone to vehicles such as the BF Injection and the Dune Buggy.

The interior of the Journey in GTA San Andreas.

Portrait of the Journey found inside Yellow Jack Inn.

The back part of the interior in the enhanced version of GTA V.

A special crate being transported inside a Journey in GTA Online. 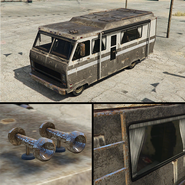 The Journey on Warstock Cache & Carry.

The Journey on the updated Rockstar Games Social Club.

The Journey in the cinematic preview on GTA V Rockstar Games Social Club.

The Journey in the cinematic preview on GTA Online Rockstar Games Social Club.