Greg Wilson
“I'm an adventurous lover. You know I like... an experimental side, y'know?”
— Joseph Daniel O'Toole

Joseph Daniel O'Toole was born in Liberty City. He is an associate of the Sindacco Family and the manager of Paulie's Revue Bar, named after Sindacco Family Don Paulie Sindacco. He has an uncle who he claims was a paedophile. He was arrested at an unknown time for statutory rape, even though the girl he slept with was said to be eighteen, and was raped in prison because of that. He was also suspected by the FBI to be downloading child pornography but was never arrested for it, though his hard drive has been searched on at least one occasion. O'Toole, having Irish ancestry, is upset with Paulie Sindacco as he has yet to be "made" due to not being fully Italian. O'Toole then begins to work for the Leone Family and employs Toni Cipriani, after Cipriani kills some of the Sindacco mobsters at a construction site in Hepburn Heights, which O'Toole filmed to release later as a snuff film.

Cipriani first helps O'Toole by driving his van around the Red Light District to allow O'Toole to get his cut from his prostitutes and then informs him that the LCPD are going to raid his club, allowing Cipriani to rescue Don Salvatore Leone. O'Toole continues to feed Cipriani information, allowing Cipriani to protect a Leone casino in St. Marks and then to destroy the Sindacco run 'Dolls' House casino.

Cipriani begins to work for Salvatore Leone and his wife, Maria Latore, but again works for O'Toole, firstly rescuing Salvatore after he was kidnapped from Paulie's Revue Bar and later protecting Salvatore when he personally goes to kill the Sindacco mobsters at the club. O'Toole later has Cipriani follow Massimo Torini, a high-ranking member of the Sicilian Mafia, who Salvatore correctly suspects is planning something in the city. Salvatore later decides to 'make' O'Toole and has Cipriani and Mickey Hamfists accompany him to the Harwood Autocrusher and Junkyard, where Hamfists kills O'Toole with a shot to the back of the head. Hamfists explains to Cipriani that Salvatore could not trust O'Toole due to his betrayal of the Sindaccos. Cipriani dumps the car containing O'Toole's body into the sea, though his body is later recovered and buried in the cemetery beside the cathedral on Staunton Island.

Sometime after the events of his death, his club is renovated by Luigi Goterelli and becomes Luigi's Sex Club 7. This decision also marks the beginning of the end to Sindacco interests on Portland and later Liberty City. 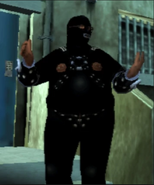 JD wearing a suit. (Mission: The Made Man)

JD O'Toole, moments before his death. (Mission: The Made Man) 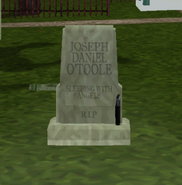