Josef is a Russian man who is fanatically obsessed with America and, despite being an immigrant himself, has an intense hatred for Mexican immigrants. Josef has a poor grasp of the English language, as the only words he can say in English are "Go car, go now!" and "Go, go, fucker, go!". He attempts to justify his views by claiming that America was built for Europeans, even though most Mexicans are of Spanish descent themselves, meaning they too would be classified as Europeans. Josef, along with his best friend Joe, form the Civil Border Patrol, a group dedicated to hunting down and deporting illegal immigrants, though most of the people they pursue are legal naturalised American citizens of Hispanic descent.

Despite being deeply patriotic, Josef appears to have poor knowledge of United States history or culture, as he sometimes shouts "God Save the Queen" or "For King and Country!" (the UK national anthem and a historic English battle cry, respectively) or "Liberty! Fraternity! Equality!" (the national motto of France). He can occasionally be seen saluting with his right arm outstretched, seemingly unaware that it is a Nazi salute.

Josef is first seen in the initial cutscene of the mission Trevor Philips Industries. He is in the middle of a fight with another man, until Trevor steps in and knocks the other guy out, then asks Janet to ban Josef since he "won" the fight. Janet replies that she can't do that because Josef is her husband, to Trevor's surprise. Janet also says that "the internet a beautiful thing". This indicates that Josef got his American citizenship only after meeting Janet on the internet and marrying her. Joe also says that he met Josef through the internet in the mission An American Welcome.

Some time later, during the Civil Border Patrol missions, Joe and Josef employ Trevor to help them hunt down supposed illegal immigrants. Trevor, being a Canadian citizen himself dislikes the pair, but goes along with them because of the cash reward. After his second outing with the duo, Trevor re-encounters Manuel, one of the men arrested during his second tour with the Patrol, who was a legal resident of the US; his family having lived in San Andreas for two hundred years, well before it was incorporated into the United States. Manuel shames Trevor for his actions and, in a regretful fit of rage, Trevor tracks down Joe and Josef to a nearby farm and attacks them. Josef tries to fight back with a Sawn-off Shotgun that he'd been previously using to threaten the Hispanic residents of the farm, but is ultimately killed. Soon after, Joe is killed as well. 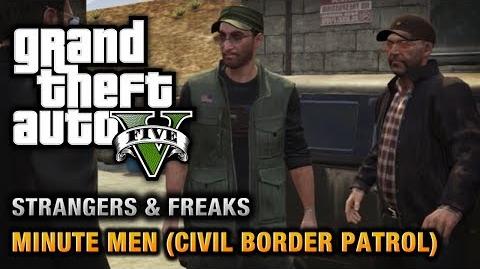