GTA Wiki
Register
Don't have an account?
Sign In
Advertisement
in: Characters, Characters in The Ballad of Gay Tony
English

Maia McCann
“I saw you fuck that Bitch on the monitor. Were you trying to rub my face in it?”
— Joni to Luis Lopez

Joni is a character in the Grand Theft Auto series, appearing as a minor character in The Ballad of Gay Tony.

Joni is a female security manager who works in Maisonette 9 alongside Luis Lopez and Dessie. She appears to have previously been on medication of some sort, as on one occasion she tells Luis she should "probably go on meds again".

Joni works with Luis as part of the "Club Management" side-missions. Luis keeps in contact with her via headset whilst scanning the dance floor from the security room for trouble, telling Luis to check out certain areas where she sees disturbances.

Joni about to sit on her chair. 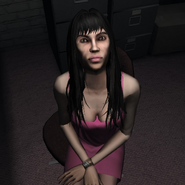 Joni preparing for a Doggy style quickie with Luis.