Unknown
“Take your ass back to the golf course, motherfucker! This the streets! You're way out your element, man.”
— Johnny Guns to Dr. Dre.

Jonathan Henderson, better known as Johnny Guns, is a character in Grand Theft Auto Online, introduced in The Contract update as the main antagonist.

He is an executive and producer for WesLos Records who has had beef with Dr. Dre since the 90s.

In the period between December 2020 and December 2021, Henderson has managed to supply copies of the phone to at least three different people, including a young unnamed party promoter, the billionaire Ben Brooks, and the leader of the North Side Vagos.

After Dr. Dre got in contact with F. Clinton and Partner celebrity solution agency, and the GTA Online Protagonist has managed to take all 3 music leakers down and has recovered their copies of the phone, Imani tracks the original stolen phone to Johnny Guns. Dre instantly told Franklin Clinton and the player that he has to take the phone back at all costs with whatever means necessary and he wants to end the beef once and for all.

As the agency no longer needed to hold on to Dre's car, the player is asked to return it to him at Record A Studios. On the way, Franklin advises that Johnny Guns has sent out a private militia to kill Dre at the studio and the player has to defend the studio and also wipe all the men Johnny sent.

Soon after, Imani tracks down his location to the Mirror Park Railyard, and as the player arrives, Johnny flees in his Dominator GTT to Los Santos International Airport and leaves them to fight more of his men. After clearing the enemies out, the player then travels to LSIA and finds his car parked behind the Devin Weston Holdings hangar.

After taking out more of his men and injuring Johnny, the player carries him out to where Dre is waiting.

Johnny Guns initially tries to deny his involvement in the distribution of the stolen material before admitting guilt and offering to put things right but the conversation tone quickly turns back to aggression, with Guns suggesting Dr. Dre belongs on the golf course, not the streets. This prompts Dre to retrieve a 9 iron from his golf bag in the back of a Baller ST and he proceeds to beat Guns with it. The outcome of the beating is not revealed although Dre claims that "golf does put him in a better mood" and asks the GTA Online Protagonist to drive him "home". 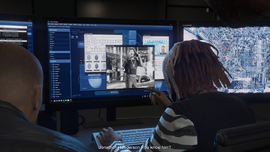 A picture of Jonathan Henderson on Imani's computer when he is first identified. 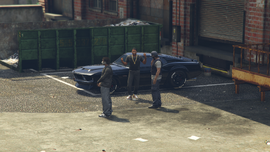 First seen in person at Mirror Park Railyard with two of his hired gunmen. 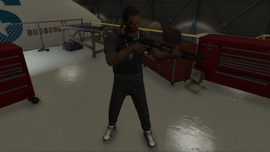 Armed with a Pump Shotgun.