Boss of the Gambetti Crime Family

Spoiler Warning: Plot details, ending details, or both are in the text which follows.
“Everyone wants to pay homage to a dying legend, everyone wants the glamor of a bygone age...”
— Jon Gravelli to Niko Bellic in Liquidize the Assets.

Gravelli was born in Meadow Hills, Dukes, Liberty City in 1923. It is likely that he was some way affiliated with a Dukes based Mafia regime since the age of 12, given his awareness of a rival organization, the Ancelotti family. His criminal record dates back to 1940, when he was arrested at the age of seventeen for possession of gambling records.

He continued to participate in minor and rigorous criminal activities, having been arrested for grand theft auto, attempted murder, and bribery - though his LCPD record states that he has never been in prison.

His son, Jon Gravelli, Jr., was born in 1968, and he grew up to become an associate within the Gambetti family, presumably working for his father. Gravelli, Jr. soon developed a cocaine addiction however, and was disowned by the family.

In 1972, Gravelli almost killed Giovanni Ancelotti's uncle, but decided to spare him, a decision he now regrets.

Gravelli became the boss of the Gambetti Family in 1978, after the death of Sonny Cangelosi. Under Gravelli's leadership, the Gambettis became the most powerful Italian-American faction in Liberty City.

During the early 1990s, Gravelli was arrested twice, for racketeering and murder and obstruction of justice, although he was acquitted of both charges. Sometime in the late 1990s to the early 2000s, Gravelli started to work with United Liberty Paper company, and befriended one of the company's senior agents.

In 2005, whilst awaiting trial, Gravelli was admitted to the Schottler Medical Center with a serious illness. He was still awaiting trial in 2006 whilst still hospitalised when he was charged with racketeering.

Gravelli was introduced to Niko Bellic in 2008 via cellphone through his contact at the United Liberty Paper company, who is referred to as a "mutual friend". Niko was first ordered by Gravelli to provide security for a politician who was wanted dead by Dimitri Rascalov's organization. Niko and the convoy are ambushed on a back street, but they survive the hit. Next, Gravelli sends Niko to Kim Young-Guk for running a counterfeiting operation in Gambetti territory.

In Liquidize the Assets, he hired Niko to destroy multiple Ancelotti drug vans, and in return for his efforts, the ULP located Darko Brevic, the man who sold out the military unit he and Niko were members of during the Yugoslav Wars - Brevic was smuggled into Liberty City where he was confronted by Niko, who then chooses either to spare or execute him.

After the completion of the storyline, internet and radio news reports announced that Gravelli died peacefully in his sleep in hospital at the age of 85.

As the leader of the most powerful mafia family in Liberty City, Gravelli is confident but not arrogant. He understands the limits of the power he obtains illegally and is part of the corrupt system of governance as opposed to against it, as his contacts range from hitmen like Niko, the contact who is implied to be working for the IAA, to the mayor and senators. Gravelli describes himself as "vain", being concerned about his appearance despite his visibly emaciated body, and particularly concerned with his and his family's legacy, saying "if it wasn't me, it would just be someone else. So it might as well be me." He is somewhat patriotic and possibly xenophobic, as he is concerned with criminals of immigrant background like the Russians and Kim Young-Guk disrupting the status quo, and agrees to assist the ULPC contact with stopping the Ancelottis and Russians from working together, as they would create a risk to national security. He may also be homophobic, as he refers to Bernie Crane as a faggot, although this may be because of the language that an elderly man like himself was brought up using, or how "faggot" was considered a more socially acceptable word at the time of the game's release as opposed to any actual homophobic tendencies.

Above all, Gravelli is as ruthless as one would expect a mafia boss to be. He rewards favours handsomely and treats disrespect and failure harshly.

NOTES
- Head of the Gambetti Crime Syndicate since the death of Sonny Cangelosi in 1978.


- Indicted several times but never convicted of a serious crime.


- Resident of the Schottler Medical Center for the last 3 years due to an allegedly serious illness. 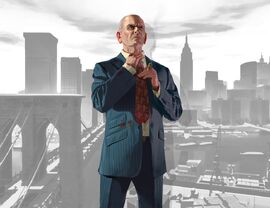 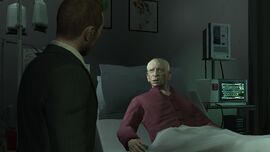 Jon Gravelli in the mission Entourage on a hospital bed.