Jolene's spirit at the top of Mount Gordo in Grand Theft Auto V.

The Ghost of Mount Gordo

Jolene was born in 1956, before the date of March 24th. At some point before 1978, she met and married stuntman John "Jock" Cranley.

In 1978, Jolene and Jock had been experiencing troubles in their marriage. Jock wanted to leave Blaine County to pursue his dreams of becoming a stuntman, but Jolene wanted to stay, saying that she had to look after her parents and run their thriving guest house. Therefore, whilst out walking by the cliffs overlooking the El Gordo Lighthouse, Jock pushed Jolene over the edge of the cliffs and she fell to her death. The police arrested Jock on suspicion of murder, but he was released without charge after the police investigation concluded that Jolene's death was accidental.

Her ghost appears floating on the cliffs of Mount Gordo at night, between 23:00 and 00:00, and produces a glow when viewed from the campsite at the base of the mountain. She has a permanent petrified open-mouthed look on her face, as well as wind blowing around her. Only while Jolene is visible, the word "Jock" is written in blood on the rock she floats above. She vanishes when the player gets too close, or when high above or at angles around her in a flying vehicle.

Down at the campsite and around where the ghost appears, exclusively in the enhanced version, sounds can be heard after 10 pm in-game time, consisting of ghostly noises and Jolene's voice moments before she died.

The ghost doesn't have an actual in-game model, and is just a 2D texture coded to appear and disappear. In the enhanced version, the player can get very close to the ghost without it disappearing by switching to First-Person mode and aiming down the sights of a weapon. The disappeared ghost will instantly re-appear if the player continues aiming.

Extreme caution is advised when traveling to the location in GTA V, as Mount Gordo is a popular location for cougars that can kill the player-character instantly. Visiting as Michael or Trevor may be handy, as their Special Abilities can help the player fight the animals.

The ghost can easily be viewed from within Director Mode by setting the time to Midnight and then adjusting back; toggle "freeze time" to spend as much time as desired examining the ghost and the message. 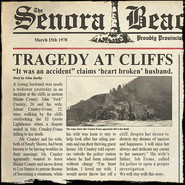 The Senora Beacon article relating the events of the tragedy.

The texture image of Jolene's ghost. 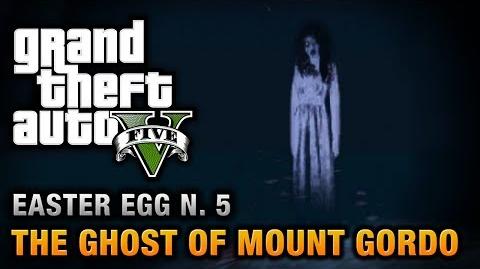