The Johnson House is a safehouse on Grove Street in Ganton, Los Santos in Grand Theft Auto: San Andreas.

The house is detached and features a two car garage. The house was owned by Beverly Johnson and is the childhood home of Sean, Carl, Kendl and Brian Johnson. It is not known when the Johnson family started living in the house, though Sweet mentions that Carl was born in the house.

The house was the target of a drive-by shooting in early 1992, which cost Beverly her life (although the Ballas gang members were aiming for Sweet instead). Carl, who had returned from Liberty City for her funeral, then moves back into the house.

Following The Green Sabre, when Sweet is arrested and Carl is exiled from Los Santos, the Grove Street Families are deprived of their leadership and Grove Street is seized by the Ballas. The house is not vandalised, although a druggie (Dope) does steal the family's blender from the kitchen. Carl can still access the home, its garage, and the weapons cache awarded after spraying all gang tags, but may be subject to attack by enemy gang members.

The home falls back into the hands of Carl and Sweet when they storm Grove Street to clean out crack dealers and Ballas. The house reappears in Beat Down on B Dup and End of the Line when the story concludes. During the Los Santos Riots, smoke may be seen rising from the exterior of the house, although this is purely cosmetic and no structural damage occurs to the house, which remains accessible.

In the upstairs bedroom there is a camera, which can be used to take pictures. Following the mission Tagging Up Turf, a spray paint can is also available in the same room.

A Wardrobe is available upstairs, across from the bedroom.

After spraying over all 100 Gang Tags four weapons spawn in the kitchen. The weapons are: an AK-47, a Sawn-Off Shotgun, Molotov Cocktails and a TEC 9. The living room also has a video game console, which can be used to play They Crawled from Uranus.

The Johnson House becomes an asset after the completion of the mission Doberman, allowing Carl to earn more money. After the mission The Green Sabre, the House loses its asset status, although this is restored after completing Home Coming.

The player can glitch Grove Street members inside the house. Whilst being followed tell them to wait whilst outside, then enter the house. Calling the gang members back will result in them spawning inside the house. Using the same trick also gets them out.

An interior shot of the ground floor.

A view of the entrance to the house.

A view of the bedroom.

A view of the exit. 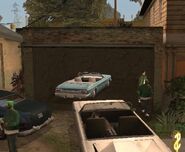 Garage of the house.

The location of the Johnson House.