View source
watch 02:40
World of Warcraft: Dragonflight - The Loop
Do you like this video?
Play Sound
For other uses, see Pegorino (disambiguation).

Boss of the Pegorino Family
Honkers

Pegorino: "I know enough about you, your cousin, your friends... I know a lot of people around you end up in jail."
Niko: "Some maybe."
Pegorino: "But that's the same all over town. This is a dying game."
—Dialogue between Jimmy Pegorino and Niko Bellic in Pegorino's Pride.

James "Jimmy" Pegorino is a character in the Grand Theft Auto series who appears as the secondary antagonist of Grand Theft Auto IV. He is also mentioned in The Lost and Damned. Jimmy is the boss of the Alderney based Pegorino Crime Family, which he took over after his father died. He is looked down upon by the Liberty City based Mafia organizations and is unable to get a seat on The Commission.

Jimmy Pegorino was born in Alderney City, Alderney. His father was the founder of the Pegorino Family, an Italian-American faction that was highly disrespected by all of the crime families from Liberty City. Pegorino was arrested for theft three times during the mid-1970s. At some point in his life, he married Angie, and they had a son together.

Taking control over the family

Eventually, Pegorino gained leadership over the Pegorino Family, and he desperately wanted to join The Commission, despite his organization being incredibly weak. He sought to impress the Commission by doing favours for them, such as allowing the Pavano Crime Family to operate in Alderney. Jimmy also thought it would be a good idea to anonymously weaken the Ancelotti Crime Family whilst improving his own, in order to prove that he is able to run a stable organization. He learned that a leader shouldn't place value on his employees until they either impress him (like Phil Bell) or, ironically, become a threat to him because of their greed (like Ray Boccino).

Pegorino's own son had committed suicide, and he then accepted his bodyguard Anthony Corrado as a son in nature.

Unbeknownst to Angie, Pegorino has a young mistress who lives in an apartment in Acter.

“Wake up you fucking mook. Everybody's trying to fuck everybody! Let's just hope they got the manners to smile in our faces before they do.”
— Jimmy Pegorino

In 2008, Phil recommended Niko Bellic's services to Pegorino. He first had Niko watch over a deal he was having with members of the Pavano Family. The deal was a set-up, and Pegorino's personal bodyguards were killed by the Pavanos, and his tribute was stolen. Niko rescued Pegorino, and chased a group of remaining of the remaining thugs to get Pegorino's money back.

In retaliation to the Pavano's betrayal, Pegorino later sent Niko to follow a couple of Pavano mobsters to a crew meeting at the Auto Eroticar dealership and kill them all. Pegorino stated that they were going to war with the Pavanos.

Later on, the police began to thoroughly investigate his "businesses", leading Pegorino to believe that several of his employees had become police informants. Pegorino initially suspected Niko and threatened him with a shotgun, but was convinced otherwise and then ordered him to kill Anthony Corrado. Corrado, who was confirmed to have worn a wire, suffered a heart attack after talking with Pegorino over the phone, but survived and received police protection in the hospital until Niko eliminated him. Believing several other members had turned states, Pegorino ordered Niko to kill Ray Boccino.

In the game's finale, Jimmy orders Bellic to take part in a heroin deal with Niko's nemesis, Dimitri Rascalov, and was promised a vast sum of money. Niko is unsure whether to comply and be paid or take his revenge, and his final decision is left to the player.

“Dimitri, what's the problem? Me and you is partners now. We're back on top.”
— Jimmy before being killed by Dimitri.
Niko and Phil are betrayed by Dimitri, forcing them to fight through the warehouse and steal the money. Jimmy is very happy and wishes Niko good luck with the money. A hired assassin targeting Niko and sent by Dimitri accidentally kills Roman Bellic at the wedding (and is counter-killed). Niko tracks down the duo with the help of Little Jacob, right before Dimitri betrays and kills Jimmy, saying he "didn't work this hard to share the spoils of a victory". Dimitri is chased down and killed by Niko on Happiness Island soon after.
“You fucking double crossing immigrant shit!”
— Jimmy trying to kill Niko, but he accidentally kills Kate McReary

Niko rebels and kills Dimitri, Jimmy's organization becomes nothing. He personally attempts to kill Niko at Roman and Mallorie's wedding, but accidentally kills Kate McReary. Niko tracks down Jimmy with the help of Roman and Little Jacob. After chasing and shooting him down, Niko tells him that the Commission thought he was a "fat fucking joke". Niko begins to walk away, Jimmy raises his gun to try and kill Niko, but before he can Niko shoots Jimmy in the head with an Assault Rifle.

“The Commission - the Old Families - I know some of those guys. And they thought you were a fat fucking joke! A joke! Huh.”
— Niko Bellic before killing Jimmy.
During the game's final battle in Out of Commission, Jimmy, just like Dimitri in A Revenger's Tragedy, has 100% body armor, as well as 200% health (about twice as much health as a normal enemy), allowing him to sustain about three times as much damage as a standard enemy. However, he is only equipped with a pistol (unlike Dimitri who has a Carbine Rifle).

NOTES
- Head of the previously small time Alderney based Pegorino Crime Syndicate which he took over from his father.


- Attempting to control rackets being run by the five Algonquin families but his power is questionable.
- Main associates are Phil Bell and Ray Boccino.
- Ties to Irish American hoods such as Gerald McReary in Dukes.
- Lives in Alderney with his wife, Angie. 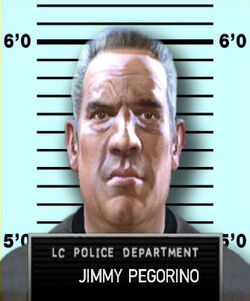 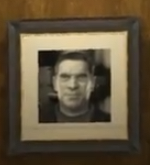 A picture of a younger Jimmy Pegorino. (Can be seen in the mission Payback)

Pegorino and Niko in the mission's cutscene One Last Thing.