"Oh yeah, fuck you! You know what? If there was a rape button, I'd be using it right now. Unless you're a faggot and you like that sort of shit. And then I'll just rape your mom instead."
―Jimmy De Santa while playing Righteous Slaughter 7, in Did Somebody Say Yoga?

Jimmy is the son of Michael and Amanda, and the younger brother of Tracey. He was put into the Witness Protection Program with his family in 2004 after his father Michael faked his death during a failed heist in Ludendorff, North Yankton.

"I can't believe you... Mom was right about you. You don't know any better and you can't help it, but you're an asshole!"
―Jimmy, about his father's behavior

Jimmy is first introduced at the end of the Franklin and Lamar mission where he purchases a yellow BeeJay XL SUV from Simeon Yetarian's dealership. Later during the same mission, "Complications," he is heard playing a first-person shooter game when Franklin breaks into Michael De Santa's home to repossess the BeeJay XL that Jimmy bought earlier.

In the mission Father/Son Jimmy calls his father to inform him that the family Marquis yacht has been stolen and he is trapped inside the boat. Jimmy tried to sell the boat for drug money but the "buyers" decided to steal the boat instead. Michael and Franklin race after him in Amanda's Sentinel after the yacht; which is being transported on a trailer down the freeway. They manage to rescue Jimmy, who was hanging on the boom, but they lose the yacht.

In the mission Daddy's Little Girl, Jimmy is playing his games console in his bedroom upstairs and is shouting insults through his headset so much that his dad cannot hear the dialog of the film he is trying to watch. Michael angrily marches upstairs, they get into an argument which ends with Michael smashing Jimmy's television with a chair. Michael attempts to bond with Jimmy by going on a cycle together. When they arrive at Vespucci Beach, Jimmy challenges his father to a bike race with the condition that if Michael loses; he has to replace the TV he just broke. After the bike race, regardless of who wins, Jimmy tells his father that Tracey is partying on the Dignity yacht with her friends and some porn producers. Michael dives into the sea and swims towards the yacht, despite Jimmy's pleas.

Later on in the mission, "Fame or Shame," Michael finds a block of cannabis in the fridge which belongs to Jimmy. He later comes into the kitchen to get his weed and has a dispute with his father which abruptly ends with the unexpected arrival of Trevor. Jimmy tells his father that Tracey is auditioning for the TV talent show Fame or Shame so Michael and Trevor rush off to stop Tracey from embarrassing herself on live TV.

"You'll thank me for anaesthetizing you one day, I promise, I hope it gave you some perspective into how unbelievably fucked up our lives are. We all need some distance."
―Jimmy in Michael Lifeinvader page, about leaving his house.

In the mission, Did Somebody Say Yoga?, Jimmy is playing Righteous Slaughter 7 when Michael comes upstairs after his unsuccessful yoga session to bond with his son. Jimmy decides to go meet a drug dealing friend at Burger Shot, and Michael insists on coming along, despite Jimmy's discomfort. Regardless, Jimmy picks up a supply of cannabis as well as a "special drink". During the trip home, Jimmy tricks Michael into taking a sip of the drink, claiming that it is not really special at all. But as Michael soon starts feeling dizzy, Jimmy tells him that he had anticipated that Michael would come along, and had his friend spike the drink with PCP. Jimmy then proceeds to throw the strung-out Michael onto the street, and announces that he is moving out and plans to keep Michael's car before driving off, even taking some of his father's money.

Later after the mission, Did Somebody Say Yoga?, Jimmy texts Michael but neither apologizes for deliberately spiking his drink nor asks Michael how he is, but to say that he spent all the money he took from him. Jimmy asks his father if he can give him another thousand dollars for the next few weeks, there is no option to either respond or give Jimmy money and Michael simply ignores his request.

Jimmy later sneaks back and returns Michael's car, explaining in a text that despite his "improvements" (a set of rims with large dollar signs on them, a "La Cucaracha" tune horn, a small spoiler, and a few low/mid-level performance upgrades) it is still an uncool "old man car", and he can't allow himself to be seen in one, also implying in a side comment that the Hispanics in his new neighbourhood were starting to give him angry looks over his choice of car horn.

Jimmy: "You do bad shit and things, and I don't know if I love you and I'm pretty sure I hate you a little bit, but I'm just so fucking upset that we can't even see each other. You're just a drunk lame dad."
Michael: " You know what? That might just be the nicest thing anybody's ever said to me."
―Jimmy and Michael discuss about their strained relationship.

In the mission, Reuniting the Family, Michael passes out after drinking whisky. He is woken by Jimmy, who has returned alone and makes a clumsy attempt at reconciliation. Michael reacts apathetically, saying that he will likely be dead in a couple of weeks, though does inquire about Amanda. Jimmy informs his father that Amanda remains angry at Michael though is also bored, and is waiting for her husband to turn up and prove that he is still committed to his family. Jimmy then accompanies Michael to pick up Amanda and Tracey, who join Jimmy and Michael in an ill-fated therapy session with Dr. Friedlander. Despite the clear tensions which remain, the divided De Santas agree to reunite and are driven home by Michael.

Later, in the Meltdown mission, Jimmy accompanies his father to the premiere of his film production debut, Meltdown. However, when they arrive there, they notice that Amanda and Tracey are nowhere to be found, Devin Weston then shows up and hints that they both are in trouble. Michael and Jimmy return to the house to find that Merryweather have attacked the house and are holding Amanda and Tracey hostage upstairs. Michael kills most of the mercenaries, but one of them catches Michael off guard and holds him at gunpoint. Jimmy then shuts off the power to the house, while wearing a soldier uniform and night-vision goggles, knocks out the Merryweather thug, and tea bags Michael by mistake. After this, Jimmy, Amanda, and Tracey leave the mansion once again for their own safety, while Weston wants to kill Michael.

Jimmy then appears in his own mission Parenting 101, where he is kidnapped by a comedian for trolling and harassing him online. Michael finds Jimmy and frees him from the kidnappers and then takes him back to The Richman Hotel.

Michael: "It's good to be a family again. I'm so happy to have you all back."
Jimmy: "All that fighting was kinda shitty."
Michael: "It's going to be better now. I promise."
—Michael and Jimmy hanging out after the end of the storyline.

Finally, after the final mission, depending of with ending the player chose, Jimmy will call some of the protagonists:

Six years after the events of Grand Theft Auto V, Jimmy makes his debut in Grand Theft Auto Online as a supporting character in The Diamond Casino Heist update. He appears during the first cutscene when the player purchases an arcade as an employee working for the "arcade" portion of the business with Wendy. Despite his hopes of having a higher position in the business, he is initially relegated to sweeping the floors and setting up arcade machines.

"He tried to knife attack me?! Nobody creeps on the J-dog my ni**as!"
―Jimmy

Dan Houser has described Jimmy as a 20-year-old, whiny pot smoker, who is prominently very lazy and addicted to video games. During Michael's character trailer, Jimmy can be seen playing on a games console in his bedroom. When he plays video games he shouts insults at other players through the headset about their mothers, sexuality and how bad they are at the game.

Jimmy shows much cowardice throughout the storyline as when he tries to stand up to his father, he backs down as soon as Michael comes back at him with aggression. He blames his dad for all of his own failings and is quick to shift the blame for any of his own poorly thought actions onto his father's loose morals and shady past. He even drugs Michael, then steals his car and takes some of his money to get his own place. However, Jimmy saves his dad (and the rest of his family) after a Merryweather goon knocks him down and prepares to shoot him by hitting the goon with a bong. Also, if Franklin chooses to kill Michael, Jimmy will mourn his father's death. Towards the end of the storyline, Jimmy starts to mature; he stops insulting other players and admits to his dad that calling people 'gay' isn't cool anymore because he has gay friends. Jimmy also starts to accept that his situation isn't completely Michael's fault, rather his own as well, and starts to exercise and look for a job. Among his other unrealistic plans for a career, the biggest one is to be a comedian, as he reveals to his father and Trevor.

Amanda is the only person Jimmy shows respect to, with Amanda defending Jimmy when Michael berates him for his laziness and unemployment.

Jimmy and Tracey have a strained relationship, with the early stages of the game showing them trading insults with each other. Following Reuniting the Family, however, their relationship begins to improve. Jimmy also saved her and their parents from Merryweather, after their home was attacked, showing he loves her in spite of their problems.

Jimmy might be based on AJ Soprano from the HBO Series The Sopranos. They are both lazy underachievers with criminals as fathers. Michael purchased Jimmy a yellow SUV, and Tony Soprano does the same to AJ in the show.

Jimmy is a redheaded, overweight young man of medium height, shorter than the rest of his family and other characters. He has a tattoo with the word "entitled" on his neck. He wears a red and black Fruntalot jersey, with "07" on the back and a white undershirt, a pair of grayish blue jeans with red, black and white sneakers and a silver necklace to match. Because of the way he acts and dresses, he appears to be mimicking the appearance and personality of a gangster rapper. He has many tattoos, one of which reads "Edifica adversario tuo aureum pons ad receptum trans.", which translates to "Build your opponent a golden bridge to retreat across.".

For his appearance in The Diamond Casino Heist, Jimmy's hair is longer and blond. He also sports a hoodie, sunglasses and a black hat. 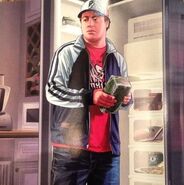 Another artwork of Jimmy.

Jimmy shown hanging onto Marquis, over a freeway.

Jimmy making a facial expression while playing his video games.

Michael and Jimmy arriving from a bike ride.

Presumably Jimmy and Tracey's grandparents.
Add a photo to this gallery

Retrieved from "https://gta.fandom.com/wiki/Jimmy_De_Santa?oldid=1211915"
Community content is available under CC-BY-SA unless otherwise noted.