Jim's Sticky Ring is distinguishable largely by its large ornamental donut visible for city blocks, being seemingly inspired by the real-life Randy's Donuts in Los Angeles, although both outlets are only similar by the concept of featuring a giant rooftop donut; a similar architectural design is found on the Tuff Nut Donuts building in San Fierro. The name 'Sticky Ring' refers to anus.

The building is located in the same outlet as the Gravy Train, Zu-Zu's Petals, Fifth Ave Antiques and Vinewood Wigs.

It is normally inaccessible, although its interior is featuring during cutscenes in missions for C.R.A.S.H., namely "Burning Desire" and "Gray Imports", being the starting place for both of these missions. The interior can in fact be accessed via the Hidden Interiors Universe. However, when CJ manages to access the shop, it says Rusty Brown's, implying that company owns the restaurant. Curiously, ketchup and mustard bottles can be found on the tables, which is unusual for a donut store indicating that it sells savoury food as well. Burger Shot cups and a Sprunk soda machine can also be found behind the counter. Sprunk and snack vending machines can also be found in the restaurant.

While doing the taxi driver side-mission in Los Santos, passengers may ask to be dropped off here. 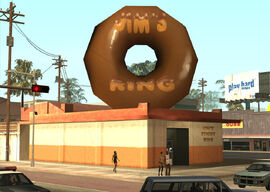 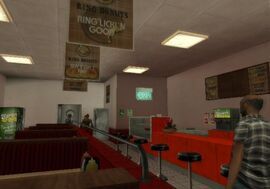 The interior of the "diner" in GTA San Andreas. 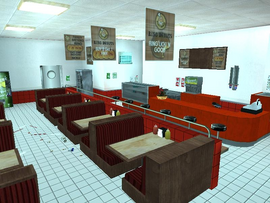 Another view of the interior.

Retrieved from "https://gta.fandom.com/wiki/Jim%27s_Sticky_Ring?oldid=1282973"
Community content is available under CC-BY-SA unless otherwise noted.