Background and Events of GTA IV

Jill Von Crastenburg was born in Algonquin, Liberty City, into the Von Crastenburg Family, one of the richest families in the world. She is the best friend of Cloe Parker. Since her 11th birthday, she has been internationally famous for her extreme wealth and presence on the Liberty City party circuit, becoming one of the most photographed celebrities in the world. When she was 12, she was sent to 15 expensive private schools at the same time after she could walk again after her father gave her diamond miners for her 12th birthday.

She is frequently hounded by paparazzi - the most outlandish examples include her being told to re-enact a tantrum because cameramen were not at the scene, and media attention for her doing the most mundane activities (buying STD cream in a Downtown Los Santos supermarket), according to Our Own Reality, Jill is apparently one of the world's most photographed celebrities and suffers from an unspecified eating disorder. She is extremely spoiled and self-absorbed. Jill has suffered from a nervous breakdown (in which she was placed into a psych ward for observation, though it was speculated that this was just a publicity stunt for her upcoming reality show).

In early 2008, she began a three-week relationship with Cuban baseball player Ernesto Asaltacunas. At the beginning of GTA IV, she left him for a new boyfriend, and a sex tape was released of her cheating on him by giving oral sex to an Opium Nights valet, as her boyfriend paid the bar tab in the very next room. The tape quickly circulated on Electric Tit but was removed from the site.

Although not seen physically in the actual game, Jill Von Crastenburg makes her presence known on the website Bleeter. A reading of her Bleets reveals her thoughts on wondering if she has grown up too fast and if 18 is too early to retire. Her Bleeter picture humorously shows that she has aged rather drastically.

There are six hotels in Los Santos called "Von Crastenburg Hotel", however it is not confirmed if she and her family own it. Her name appears on one of the many stars on the sidewalk in Downtown Vinewood.

During the Vinewood Star Tours, the tour guide says that Jill made some sex videos with a Romanian shot up team in the streets of Los Santos.

According to Our Own Reality, she is a college dropout, but they confirm that she is still in her teens. Her entry in the LCPD Database listing her age as 13 makes it highly unlikely that she is older. Curiously, she is the only minor listed in the database.

Assuming that she is 13, she is most likely a caricature of modern children (especially wealthy and famous) growing up too fast.

The Von Crastenburg Family own many large homes. One of the many residences is a 45 bedroom mansion along in Westdyke, Alderney. It is on Owl Creek Avenue, next door to Jill's best friend Cloe Parker.

Jill Von Crastenburg is based on Paris Hilton and Nicole Richie (as a teenager). Both of them have an extreme party life style and, in the case of Paris Hilton, they also have a family well known for their hotel chain.

The scenario is also likely meant to poke fun at the unhealthy sexual images of Lindsay Lohan, Miley Cyrus and the Olsen Twins, while they were still under 18. Pedophilia is a topic discussed in the game. 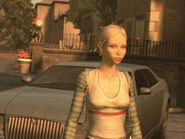 One of Jill's friends, Kayla.

Jill's star on the Vinewood Walk Of Fame.

Jill buying lotion at a 24/7 supermarket.

Jill in Bleeter.
Add a photo to this gallery

Retrieved from "https://gta.fandom.com/wiki/Jill_Von_Crastenburg?oldid=1194611"
Community content is available under CC-BY-SA unless otherwise noted.