Kevin McKidd
“Ain't we got a gig to go to? A racket to make? Groupies to abuse?”
— Jezz Torrent

Jezz is the lead singer for the Scottish hair metal band Love Fist.

In 1986, Torrent is first seen at one of Juan Cortez's parties, alongside two women.

Torrent, alongside Kent Paul, Dick, Percy and Willy, later hired Tommy Vercetti to do some work for them, including the task of bringing Mercedes Cortez to them and buying some drugs for themselves, called "Love Juice".

Later, a psycho fan of Love Fist tries to kill the band for unknown reason, however in both missions, the band was saved by Tommy Vercetti.

According to his bandmate Percy, Torrent practices bestiality and has previously had sex with sheep, though the truth behind this is unknown, as it may simply be an example of the band members taunting each other.

Torrent is a member of the Epsilon Program, and writes a testimonial on their website about how the cult helped him overcome a drug addiction.

It is said on the TV show Fame or Shame that Jezz left Love Fist and launched a solo career (in HD Universe canon) and produced a 1991 record named "This Is a Power Ballad", co-written with Crow, which was number one in Germany for nineteen weeks. The song itself is sung on the show by contestant William Angio. Torrent is one of the honoured celebrities on the Vinewood Walk of Fame.

Jezz is also mentioned in Grand Theft Auto V on Weazel News during a report about a hotel offering new packages, including one called the "Jezz Torrent package". The reporter mentions that Jezz shat himself in an elevator, and went running around the street naked. Jezz and Percy are also mentioned by Willy in the strangers and freaks mission Vinewood Souvenirs - Willy.

In Grand Theft Auto Online, as part of the The Diamond Casino & Resort update, the player can buy the Love Fist Guitar, which was played by Jezz Torrent, to decorate their Master Penthouse. 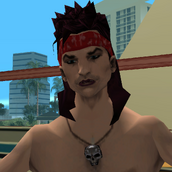 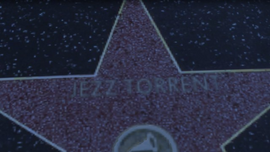 Jezz Torrent's star on the Vinewood Walk of Fame. 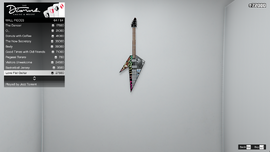 The Love Fist Guitar, played by Jezz Torrent, as a Master Penthouse decoration.