It is possibly a shipping company, as several containers are seen in the Port of Los Santos. The company also owns a small office building on Paleto Boulevard in Paleto Bay and manages a warehouse in the LSIA area.

It can be assumed that Jetsam includes transport of hazardous chemicals as there is a sign in front of the terminal that reads: "This facility contains chemicals known to the state of Los Santos to cause cancer, birth defects or other reproductive harm". That same sign claims that Los Santos is a state, while in-game, San Andreas is the state, and Los Santos is just a major city. This is probably a mistake/oversight by the game's texture artists.

The Terminal building of Jetsam houses flags of countries including Canada, The United Kingdom, Mexico, Russia, France, and Ireland. This may symbolize that Jetsam exports to these countries.

In Grand Theft Auto Online, the company appears as a minor sponsor on the custom liveries for the 190z.

It is likely based on the transport and logistics companies Kuehne + Nagel and Maersk Line. 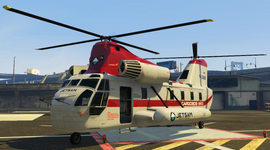 A Jetsam Cargobob.
Add a photo to this gallery
Locations

The Jetsam Paleto Bay office.
Add a photo to this gallery
Other

Jetsam containers in the Terminal.
Add a photo to this gallery

Retrieved from "https://gta.fandom.com/wiki/Jetsam?oldid=1174942"
Community content is available under CC-BY-SA unless otherwise noted.