View source
watch 02:56
Raise a Floppa - The Loop
Do you like this video?
Play Sound
Not to be confused Jethro, a character in Grand Theft Auto 2.
Definitive Edition

Jethro is voiced by John Zurhellen.

In 1986, Jethro, along with Dwaine, resides in Vice City and hangs out at the Boatyard in Viceport. which is bought in the storyline by Tommy Vercetti.

By 1989, Jethro and Dwaine moved to San Fierro and became friends with The Truth, whom they buy drugs (including marijuana) from.

By 1992, Jethro had began working for a Xoomer Gas Station in Easter Basin, San Fierro but is recruited by Carl Johnson to work at his garage as an auto mechanic.

Jethro later suggests that Carl go to the Driving School in Doherty and, after completing the driving schools, informs him of a street racing circuit in San Fierro. 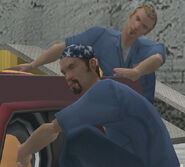 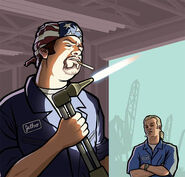 Artwork of Jethro (left) and Dwaine from GTA San Andreas.