Standard White - 100%
“Experts agree that the world is ending. And other experts agree that the only thing you can do about it is get online and fine tune your consumer choices. Introducing the latest Dinka Jester: the car with the killer smile is back, and this time it's so deadpan we're pretty sure it's not even joking. So stop doomscrolling. You've found it.”
— Legendary Motorsport description.

The Dinka Jester RR is a 3-door liftback coupe featured in Grand Theft Auto Online as part of the Los Santos Tuners update.

The Jester RR features an aerodynamic design with similar layout to the Jester and its Classic version, where the front end is distinguished by the hexagon-shaped mesh grille on the centre and two large mesh intakes beside it. On the upper area, the car has sleek headlamp housings in a similar manner to the Jester and its Racecar variant, where the outer circular units work as the main lamps and the modern, LED-like inner strips as the high-beam lamps, while vertical intakes can be seen below the outer units. The bonnet area features small elevations starting from the upper edges of the central grille and near the windscreen, while the manufacturer emblem can be seen on the front. The same bonnet opens to reveal a black detail surrounding the engine bay,

The sides of the car are denoted by the sectioned front fenders with black details and small exit vents on them, as well as the upswept shape on the skirting area and next to the doors, also housing vertical intakes. The bottom sides have small black, plastic-like extensions, as well as coloured door handles. The greenhouse area is predominated by the black trim around the windows, black A-pillars and triangular rear-quarter windows with additional surrounding on them, along with coloured mirror shells with black support frames and modern, LED-like strips. The roof area has two black lines separating the roof panel from the rest of the car.

The rear of the car has a small boot lid with a very elevated shape conforming a lip spoiler, bearing the third brake lamp and the manufacturer emblem on the rear. Either side of the car are large black tail lamp housings with long vertical intakes, with the former having four ring-like lamps of varying sizes, while the area below the boot lid bears the corresponding badge displaying the vehicle's name and a dedicated section for the number plate. The lower area is occupied by an open section with a black detail above and dual circular exhaust tubes on either side, while the centre of the car has an open section with a single diffuser frame on the lower side.

The interior of the car is basically a white/paintable variation of the one used in cars like the FMJ and the Tempesta, with carbon-fibre paddle shifts behind the steering wheel and the manufacturer emblem on the horn cap.

The primary colour of the car is applied on the bodywork, the overstitches of the interior and the horn cap, while the secondary colour is aplied on the mirror shells and the brake calipers. A trim colour is also available for the interior, as well as a dial colour. It uses a set of six-spoke dual rims with asymmetrical design, where the thinner spokes are always finished in black and reach the centre of the wheel, while the larger ones are finishes in a colour and end next to each of the six bolts seen around the centre of the rims. These large spokes, as well as the outer surrounding, can support a dedicated colour, which is only seen in naturally-generated examples from Content Creator. Low-profile tyres are fitted as standard.

The Jester RR has a good top speed and good acceleration. Handling is pretty good too as it doesn't lose too much traction around corners. Steering response is sharp.

However, one must take note that despite having precise steering, the Jester RR can still suffer from oversteer if the driver hits a curb upon corner entry thus caution have to be taken and the traction upon hard launch isn't great as it spins its wheels massively before it starts to gain speed.

The vehicle is powered by a twin-cam Inline-4 engine fitted with a pod air filter on the inlet manifold. Said engine is coupled to an 8-speed gearbox in a front engine, rear wheel drive layout, and uses a heavily-edited variation of the one used on the Jester and the ETR1. 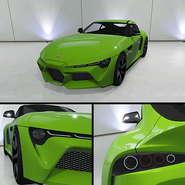 The Jester RR on Legendary Motorsport.

The Jester RR in the cinematic preview on Rockstar Games Social Club.