Standard White - 100%
“Dinka are famous for their hyperbikes and other suicide machines, but their legacy only has one name on it: the Jester Classic. They may have set out to make a sports GT, but they accidentally made the most iconic street racer ever to do a quarter mile with plenty of change out of ten seconds flat. It's still as beautiful as it ever was, it'll still eat you alive if you so much as flinch while you're behind the wheel, and you still wouldn't change a damn thing.”
— Legendary Motorsport description.

The Dinka Jester Classic is a classic sports car featured in Grand Theft Auto Online released as part of the After Hours update.

The Jester Classic was originally intended to be released as an Event vehicle subsequent to the initial release of the Southern San Andreas Super Sport Series update, but was instead cancelled until the release of the After Hours update[1]. Although the reason for its cancellation is not officially known, the version released in the After Hours update is an updated model that fixed a large majority of issues that were found with the original model (see Bugs/Glitches). The car was also released with a large variety of modifications alongside the existing ones from the previous update, including 10 liveries.

The Jester Classic is almost exclusively based on the Toyota Supra JZA80 (Mk IV), with the headlamps inspired by the ones found in the Nissan 300ZX Z32. The greenhouse area closely resembles the one found in the Subaru BRZ/Toyota GT86.

The Jester Classic continues the design cues of the original Jester from Grand Theft Auto: San Andreas, sharing the long, rounded design. The front area of the bumper is predominated by a set of three meshed intakes, with the central one intended to direct airflow to the radiator and the outer ones intended for the front brakes. The upper area has two black headlamp housings behind glass casings, each one containing a rectangular lamp on the inner side and a circular one on the outer sides, while the area in between bears the manufacturer emblem, just ahead of the seam between the bumper and the rest of the body. The bonnet is relatively simple and opens to reveal the engine bay with a strut brace over the engine. Additional badging can be seen on the engine cover.

The sides of the car follow a similar profile to the GTA San Andreas iteration of the Jester, having long intakes that direct airflow to the rear brakes and rounded mirror shells mounted on the doors, near the A-pillars. The greenhouse area is simple in design and features black trim around the windows, while the area behind the cabin uses a slanted hatch with a ducktail spoiler on the rear end.

The rear end of the car assumes a relatively flat profile, having a third brake light and manufacturer emblem on the centre, below the ducktail spoiler. On the outer sides, the car has large black tail lamp housings, each one having three circular lamps with smaller ones within. The bumper is relatively flat and has a dedicated section on the centre for the license plate and the vertical reverse lamps, as well as two mouldings for the exhaust tubes.

The interior of the car is the same used on the Sultan RS, itself being a paintable derivative of the Sultan interior. However, the horn cap bears the corresponding Dinka logo.

The primary colour of the car is applied on the bodywork, while the secondary one is applied on the mirror shells. A trim colour is also available for the interior, being applied on part of the doors and the back section, the inner portions of the seats and the stitching. It uses a set of rims similar to the "Slideways" tuner rims available in Los Santos Customs and can also support a dedicated colour (though it is only possible on naturally-generated examples such as in Content Creator), albeit with a darker tint/shade.

The Jester Classic has balanced statistics to cruise around urban areas, as it has good speed and acceleration, as well as great handling. The strong grip keeps the car controllable at sharp turns and rarely loses control over small bumps and curbs, but has small understeer at higher speeds. Steering is rather loose at taking corners, but this also means good drifting capabilities in the hands of a skilled driver. In comparison to its modern equivalent, as well as the racecar version, the Jester Classic is able to go as fast as the aforementioned vehicles, but because of its slightly inferior acceleration and the rear wheel drivetrain, it requires a long runway to eventually surpass the aforementioned counterparts.

The Jester Classic is powered by a twin-cam Inline-6 engine, coupled to a 5-speed gearbox in a front engine, rear wheel drive layout. A fully-animated turbo can be seen in the front of the vehicle with the "Street Build" options in mod shops, which spins faster as the engine revvs up. It uses a high-revving engine sound also found on vehicles like the Bifta and the Kuruma.

* denotes mod options and/or groups that were added in the After Hours update.

While most of the modifications were retained from the original version, some options were changed and/or moved, which were present prior to the After Hours update and available via trainers: 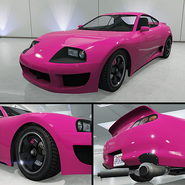 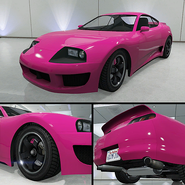 The Jester Classic on the updated Rockstar Games Social Club.

The Jester Classic in the cinematic preview on Rockstar Games Social Club. 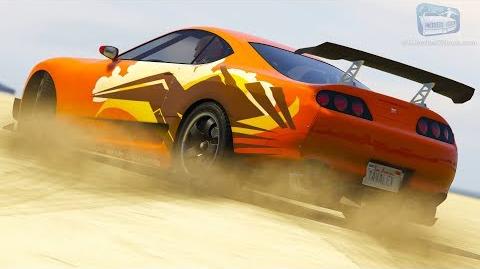 These issues were the likely reason the model was not released as intended and instead fixed in a subsequent update.[1] 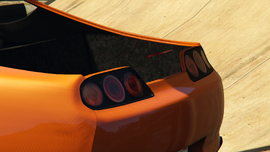 The unmoved brake light. Also note the rearlights are a plain texture. 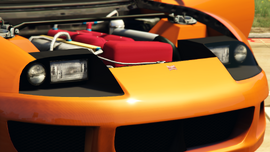