No
“A Japanese hybrid-electric sportscar with a front-end designed to look like an angry grin might be too whimsical for some, but with a 4-liter V6 engine and 420hp, the Dinka Jester still packs a serious punchline. Race tuned special edition.”
— Southern San Andreas Super Autos description.

The Jester Racecar is essentially a Jester with a racing livery, sharing the same design and features. The stock car can be modified further in Los Santos Customs, including the ability to respray the underlying color. The sponsorship decals, however, cannot be changed or removed.

The Jester Racecar is painted with a primary colour for the body, while the secondary colour is applied on the mirror wings and the interior stitching. The stock wheels share the same rim design as the ones from the regular Jester, being similar to the "Dash VIP" rims available at Los Santos Customs (albeit no longer finished in carbon fibre and able to support a dedicated colour). The car is set to spawn in a white and red colour with red rims (although purchased examples set the secondary colour to white).

The Jester Racecar has the following list of sponsors on the livery: 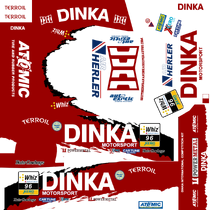 The Racecar version of the Jester improves upon the original in almost every way, offering improved acceleration, slightly higher top speed, and more responsive handling with a tighter cornering circle. The already good braking and crash deformation are unchanged. This overall improvement makes the Jester Racecar a very solid choice for racing, and it serves as a well-rounded choice suited for almost any kind of race in the Sports car class. The Jester stays a competitive model even through new cars of her class.

If listened carefully, the Racecar variant sounds slightly louder than the standard Jester.

*The Jester (Racecar) is limited to only the Classic, Matte, and Metallic color options. All color choices keep the liveries on the car intact.

The Jester (Racecar) on the Rockstar Games Social Club.

The Jester (Racecar) on the updated Rockstar Games Social Club. 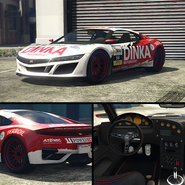 The Jester (Racecar) on Southern San Andreas Super Autos in the enhanced version of GTA V.

Dinka poster with the Jester (Racecar).