"A Japanese hybrid-electric sportscar with a front-end designed to look like an angry grin might be too whimsical for some, but with a 4-liter V6 engine, 420 hp and a top speed of 180mph, the Dinka Jester still packs a serious punchline."
―Legendary Motorsport webpage.

Designed as a two-door sports coupe, the Jester bears resemblance to several real life cars, such as the original Nissan Z, the final generation Toyota Supra, and a hint of Fiat Barchetta. But the design has a closer resemblance to the Toyota Supra.

The Jester now resembles the 2015 Honda/Acura NSX, with curvy features and distinct Japanese styling. The headlights and the hood are derived from the BMW i8. The headlights may also draw some inspirations from those of the Honda Civic LX.

The Jester is made up of an aggressive front face made by the irregular shape of the headlights, causing it to resemble an angry grin. There is a noticeable Japanese style on the Jester, which included many sharp curves throughout the car, specifically the front and sides. The rear is more sloped and rounded, giving it a stark contrast between the front. The Jester also features 2 fuel tank caps on either (1 on either side).

Jester-GTAV-socialclub.jpg
The Jester on the Rockstar Games Social Club.
Jester GTAVe Interior.jpg
Interior first person view in the enhanced version of GTA V.
Add a photo to this gallery

A Jester (Racecar) in GTA V.

"A Japanese hybrid-electric sportscar with a front-end designed to look like an angry grin might be too whimsical for some, but with a 4-liter V6 engine and 420hp, the Dinka Jester still packs a serious punchline. Race tuned special edition."
―Southernsanandreassuperautos.com description. 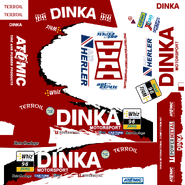 Livery on the Racecar Jester.
Add a photo to this gallery

The Jester has good top speed and acceleration, making it comparable to other sports cars in its class. The acceleration is average, however the handling makes up for this. Based on a Japanese sports car, the steering and agility of the vehicle are extremely sensitive and responsive, due to the fact that the Jester is one of the only all-wheel drive sports cars in the game. This also allows the car to have exceptional handling even over slippery or wet surfaces, making it a useful getaway vehicle even in poor conditions.

Due to the fact that there is an electric motor, there is no loss of power during gear shifts; this is very useful when racing and simply wanting a smooth ride. But the Jester tends to start drifting when driven on dirt roads, most likely due to it's large power output.

Crash deformation is excellent, and it can take multiple front end collisions without deforming the front wheels.

The Jester can only be modified at Wheel Arch Angels in Ocean Flats, San Fierro. However, some people prefer the car un-modded, due to its Urban style that it offers.

Retrieved from "https://gta.fandom.com/wiki/Jester?oldid=731032"
Community content is available under CC-BY-SA unless otherwise noted.