“A Japanese hybrid-electric sportscar with a front-end designed to look like an angry grin might be too whimsical for some, but with a 4-liter V6 engine, 420 hp and a top speed of 180mph, the Dinka Jester still packs a serious punchline.”

The bears numerous intakes on the front bumper, square-shaped headlamps inside glass casings and a long bonnet. The sides have long intakes on the skirting area, while the greenhouse area assumes a sloped profile on the rear section. The rear end is mostly flat, having circular tail lamps and two exhaust tubes below the rear bumper. Jesters can spawn in a variety of primary colours for the body.

The Jester returns in Grand Theft Auto V with a drastic change, where it resembles the 2015 Honda/Acura NSX, with curvy features and distinct Japanese styling in both the bodywork and front and rear fascia. The headlights and the hood are derived from the BMW i8.

The Jester features a noticeable Japanese styling, which include many sharp curves throughout the car. The front face is predominated by the CFRP splitter at the bottom and the inner sections of the outer intakes, together with a central intake with two separations near the outer sections. The upper area is made up of an aggressive front face made by the irregular shape of the headlamps and the main grille, causing it to resemble an angry grin. The main grille also bears the manufacturer emblem on the centre, while the headlamps are placed in black housings. The bonnet area features an impressed area that is narrower near the fron end, and curves outwards up to the width of the windscreen's base.

On the sides, the car makes use of inset areas around the front fenders and on the lower sides, together with CFRP skirts. The middle section features distinctive formations tha start from above the inset front sections and run towards the rear end, with a slight curvature over the rear wheel arches. The wheel arches also have formations that give the car a wider profile than the middle section. On the greenhouse area, the car makes use of black trim around the windows, as well as black A-pillars with body-coloured mirror wings. Towards the rear-quarter windows, the car has open sections that allow the air to flow behind the rearmost pillars, while the roof has an impressed area on the centre, which runs from the front to the rear. The boot area is generally flat and has a ducktail spoiler.

The rear end is more sloped and rounded, giving it a stark contrast between the front. The upper area features a black panel that houses red modern light strips around the upper section and outer sides, as well as the manufacturer badge on the centre and lettering on the passenger side that display the car's name. The lower portions of the car are occupied by the black housings with the reverse lamps on the outer sides, followed by three meshed vents, two exhaust tips below the reverse lamps and a CFRP section below the car. A license plate can be seen on the bumper area, just above the central vent.

The interior of the car uses the same interior and dial set from the Vacca, itself being a derivative of the Banshee interior. The Dinka logo can be seen on the centre of the steering wheel.

The primary colour of the car is applied on most of the bodywork, while the secondary one is applied on the portions of the front central intake, the impressed section of the bonnet area, part of the roof and the interior stitching. The car uses a carbon derivative of the "Dash VIP" rims seen in Los Santos Customs, wrapped in low-profile tyres.

Based on what the files suggest,[1] the car performed similarly to how it did in San Andreas. However, this time it had a RWD configuration. Because the car never made it into the final game, it's unknown if it remained exactly the same as in its predecessor.

The Jester has good top speed and acceleration, making it comparable to other sports cars in its class. The acceleration is average, however the handling makes up for this. Based on a Japanese sports car, the steering and agility of the vehicle are extremely sensitive and responsive, due to the fact that the Jester is all-wheel drive (20% - 80%, front to rear torque distribution). This also allows the car to have exceptional handling even over slippery or wet surfaces, making it a useful getaway vehicle even in poor conditions.

Due to the fact that there is an electric motor, there is no loss of power during gear shifts; this is very useful when racing and simply wanting a smooth ride. But the Jester tends to start drifting when driven on dirt roads, most likely due to its large power output. Crash deformation is excellent, and it can take multiple front end collisions without deforming the front wheels.

Despite claiming to have a V6 engine, it actually has a V8 engine, which can be seen through the rear window. The Jester shares the same engine sound as the Coquette.

The Jester can only be modified at Wheel Arch Angels in Ocean Flats, San Fierro.

Possible combinations of modifications that can be given to the Jester at Wheel Arch Angels in GTA San Andreas. 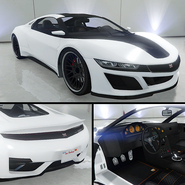 The Jester on Legendary Motorsport in the enhanced version of GTA V.

The Jester on the updated Rockstar Games Social Club.

The Jester in the cinematic preview on GTA V Rockstar Games Social Club.

The Jester in the cinematic preview on GTA Online Rockstar Games Social Club.

3 heavily modified variants of the Jester may appear in Vehicle Cargo source missions. Each variant has a unique license plate number, colour combination and different set of bodywork modifications.

Pre-modified variants of the Jester can be seen driving around Los Santos randomly. 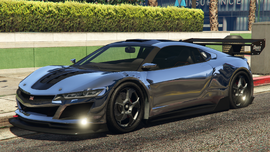 Like the randomly spawning modified Jesters, two sets of Jesters may spawn outside Los Santos Customs, pre-modified. These again only spawn in single player. The vehicles appear in set color sets with the same modifications. They will not spawn with any of the default extra components. These variants are named "LS_CUSTOMS_MODDED_SP" and use the exact same modifications and colors as the Business DLC Sports Modded sets. 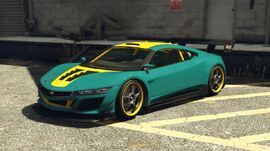