Jesse is a minor character in Grand Theft Auto V, appearing as a soapboxer.

He is an impersonator of Jesus Christ. If approached, he can be heard speaking various biblical phrases.

He seems to be under the influence of some drug as his ramblings make little to no sense.

If interacted with Trevor Philips, they both share certain resentment to their respective father figures. In contrast, if interacted with Franklin, he'll say his father is wonderful and that he loves everyone.

Jimmy mentions him during the mission Reuniting the Family, claiming that Jesse is among the many men his mother had an affair with. 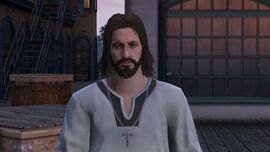 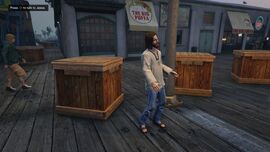