The Jefferson Street Credit Union Building is located in Staunton Island in Torrington. Beside the building on the same block is the Morningstar Building and its plaza. The building was partially constructed before 1998, and between 1998 and 2001, it was extended to become the tallest building in Liberty City, surpassing the Bedford Point Tower. The building is connected with a large commercial building, a property of FBC Bank. A package is also hidden behind the figure of space in Grand Theft Auto III. In 1998, before this skyscraper was completed, the Bedford Point Tower was the highest building.

Jefferson Street Credit Union is probably a credit card company or society as the name implies, but also as a bank. The company or society is not well known, but is characterized by having to accommodate the tallest building in the city. 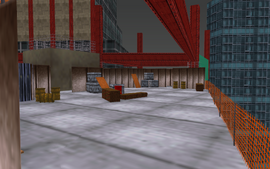 The construction site on the top of the building seen in GTA Liberty City Stories.

The small Square in Jefferson Building on GTA Liberty City Stories, with the clear star in the middle.

Retrieved from "https://gta.fandom.com/wiki/Jefferson_Street_Credit_Union_Building?oldid=1159956"
Community content is available under CC-BY-SA unless otherwise noted.