Jeff: "Remember my wife Shirley? She had an accident... in the kitchen."
Niko: "What kind of an accident?"
Jeff: "The kind of accident where you stab yourself fifty fucking times with a kitchen knife, you fucking whore. Fuck my friend will you? Huh? Well, who's laughing now? Bitch! Huh? Not you. You're fucking dead whore!"
—Jeff describing how he accidentally killed his wife in a fit of rage to Niko Bellic during his random encounter.

Jeff is married to a woman named Shirley, they have a son together and is extremely paranoid that she is cheating on him. Jeff reveals in the final mission that his mother left his father, which probably traumatized him into his current state. Despite having obvious mental problems and wearing shabby clothes, he is an extremely wealthy businessman with a black credit card. Shirley became distressed by his paranoid behavior, such as sending her underwear to a laboratory and demanding she get a tracking device in her head. She then turned to another one of Jeff's wealthy friends for emotional support, and although he was secretly interested in having an affair with her, Shirley was only going to him for a platonic friendship and was very näive to his obvious attraction cues. 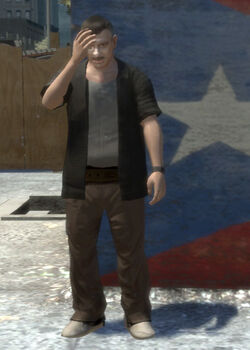 Jeff is first encountered in northern Algonquin, near East Holland.

Jeff discovers that his wife has been interacting with his friend, and follows them to his friend's apartment near Lancaster, when he randomly encounters Niko Bellic. He pays Niko to take reconnaissance photos of his wife and friend (driving in Shirley's Feltzer to the Superstar Café). Niko successfully sends him a photo by text message, and seeing they were platonic friends, consoled Jeff that it wasn't necessarily proof of her cheating on him.

By the player's choice, this can be the last time Jeff is met, if you decide to kill Shirley and/or her friend. See Trivia for more information.

Ten game days later, Jeff calls Niko to request his services and meet him in an underground car park. Despite Niko's advice, Jeff violently stabbed his wife fifty times with a kitchen knife and hid her body in a Blista Compact, now asking Niko to dump the car in the Humboldt River. Niko successfully does so, and is rewarded by Jeff.

“Goddamn you! You're just like all the rest!”
— Jeff, before his death.

Later in the game, Niko encounters Jeff again near Drusilla's in Little Italy. He remarried in a remarkably short amount of time, and believed his new wife was cheating on him as well. He followed her to the restaurant in the same manner as he did with Shirley, where she was having a drink with her ex. Jeff then requested that Niko kill her, which a disgusted Niko refused, Jeff then decided to deal with it (kill his new wife) himself, and ran out into the street, where he was accidentally hit and killed by a Turismo. The driver - a stereotypically posh Englishman, calls 911, but quickly regrets his decision, and drives away from the accident as soon as the police put his call on hold. 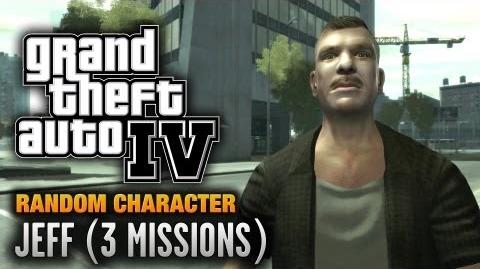