The restaurant is located on the corner of Vinewood Boulevard and Meteor Street in Downtown Vinewood.

The restaurant is located on the ground floor of an old building and occupies a large part of the surface of it. Its name indicates that it specializes in desserts and that it may have a theme related to the musical genre of jazz. The menu board states it serves; appetizers, entrees, salads and soups & desserts. The store is not enterable and plays no role in the storyline.

The restaurant is largely inspired by the Soul Restaurant & Bar found on 7046 Hollywood Boulevard[1],in Hollywood, in the city of Los Angeles. 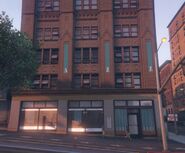 Jazz Desserts as seen from the outside