He was a member of the North Holland Hustlers. He was a small time drug dealer and was therefore wanted by the police. To avoid being arrested by the LCPD, he became a police informant and ratted out his fellow gang members including leader Dwayne Forge. When Dwayne was incarcerated, Jayvon started to date Dwayne's girlfriend, Cherise Glover.

When Dwayne gets out of prison, he goes to his former apprentice Playboy X, who connects him with Niko Bellic. Dwayne sends Niko to kill Jayvon, who was, at the time, with Cherise at an arcade in Chinatown. Jayvon manages to get on his bike and flees, while being followed by Niko, who eventually kills him and takes his money back to Dwayne. 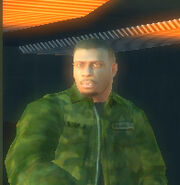 Retrieved from "https://gta.fandom.com/wiki/Jayvon_Simson?oldid=1231875"
Community content is available under CC-BY-SA unless otherwise noted.