"I'm an important guy, you gotta help me out!"
―Javier, after surviving the plane crash.

As one of Martin Madrazo's cousins, Javier was a main enforcer in the powerful Los Santos Mexican drug running operation, the Madrazo Cartel.

Javier first appears while escorting Martin to Michael De Santa's mansion after Michael had pulled the deck of Martin's house down the side of a hill having mistaking it for the home of Kyle Chavis, the tennis instructor who had slept with his wife.

Later on, Javier betrays Martin and agrees to provide the FIB with information on his cousin's illegal activities. Martin discovers this, and sends Michael and Trevor Philips to shoot down Javier's plane and steal the briefcase containing the incriminating documents that he was carrying; to use as evidence against him. After Michael shoots down the plane, Javier survives the crash initially, but he is quickly found and killed by Trevor, who had followed the plane closely as it descended and ultimately crashed into a field in Blaine County. 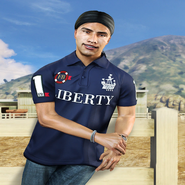 A portrait of Javier seen on Martin's tablet in "Caida Libre"

Javier at the Madrazo Ranch.

Javier's corpse in Caida Libre.
Add a photo to this gallery

Retrieved from "https://gta.fandom.com/wiki/Javier_Madrazo?oldid=1174291"
Community content is available under CC-BY-SA unless otherwise noted.