During the mission Dam and Blast, while CJ is explaining the plans for the Caligula's Casino Heist, CJ notices a group of 3 men standing in the doorway of the setup room, the Four Dragons Casino utility closet, CJ then tells the men to fuck off and two of the men leave; however, one man, the Janitor, stays and informs CJ he lives here. Later on during Up, Up and Away!, the Janitor is seen listening to the plans to steal a Bank van for the Caligula's heist hinting he may be part of the heist crew. During the Caligula's Casino Heist, after CJ opens the garage door to allow the heist crew in the janitor is seen coming out of the passenger door with Woozie and the Triads, and fighting his way to the bank vault with the other Triads. 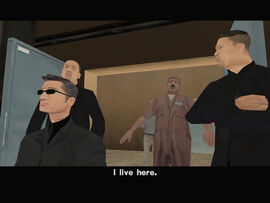 The Janitor informing CJ he lives in the utility closet. 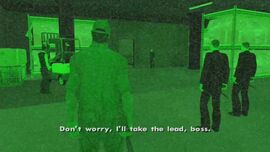 The Janitor during the Caligula's Casino Heist.