Leslie Alexander
You may be looking for Janet Vance.
“Okay, but anymore bodies turn up in my bar, I swear, I will not serve you.”
— Janet to Trevor Philips.

Not much is known about Janet except that she works at Yellow Jack Inn as a bartender in Sandy Shores, Blaine County. She is married to Josef, a Russian man who she met on the internet and is noticeably younger than her. She married him so he could gain American citizenship.

Janet is first seen in Trevor Philips Industries, when Trevor enters the Yellow Jack Inn. She immediately tells him that he is banned from the bar. A bar fight is taking place, and is ended once Trevor incapacitates one of the brawlers. The second fighter is Josef so Janet warns Trevor but serves him a drink. 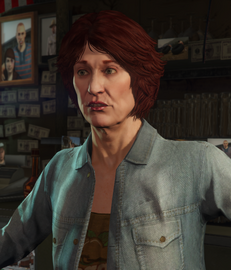 Janet in the original version of Grand Theft Auto V. 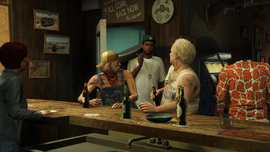