GTA Wiki
Register
Don't have an account?
Sign In
Advertisement
in: Characters, Characters in GTA V, Soapboxers, Children of the Mountain

Children of the Mountain

Lindsay Perry
“It's simple and clear. Embrace your actuality.”
— Jane

Jane is a minor character in Grand Theft Auto V, appearing as a soapboxer.

She can be encountered by Michael De Santa, Franklin Clinton, or Trevor Philips in front of the fountain at the Rockford Hills City Hall, near Carcer Way in Rockford Hills. She appears to be a stereotypical "new age" soapboxer, preaching about enlightenment and self-actualization. She is a recruiter for the Children of the Mountain. During the small interaction with Franklin Clinton, it is revealed that her depression has caused her to live in denial. She can also be spoken to by the other protagonists.

Her outfit will be different depending on what time of the day she is encountered. 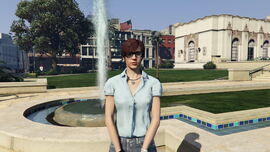 Jane in an alternate outfit.