• ­Rescue Chan from his kidnappers.

• ­Go to the burning vehicles.

• ­Take Chan back to his garage.

• ­The kidnappers are back. Watch out.

Raw Deal (Only if Carpe Dime has been completed)

"Kidnapped in my own car! Again!"
―Chan Jaoming

Jackin' Chan is a mission in Grand Theft Auto: Chinatown Wars, given to protagonist Huang Lee by Chan Jaoming.

A Triad tells Huang that Chan has been kidnapped by the racers from the previous mission, after they discovered he cheated his way to victory. Chan is now being held in his own car and the kidnappers are heading to the docks in BOABO.

Go to the docks to find two Irish American Killers gang members setting Chan's car and two oil tankers on fire with Molotov Cocktails. Chan is inside the vehicle's truck and will die if the player does not extinguish the fire quickly. Steal the fire truck nearby and use the water hose to put out the fire. Once the fire has been controlled, get Chan's car and return to his garage. The kidnappers will chase Huang relentlessly along the way so watch out.

Once the player manages to safely arrive to Chan's garage, the last cutscene shows Chan blaming Huang for his kidnapping, saying that if Huang had not sabotaged the street race champion car, none of this would have happened, despite himself being a hypocrite as he ordered Huang to sabotage the car.

The reward for completing this mission is $150. The mission Carpe Dime is unlocked.

Chan trapped in his burning car. 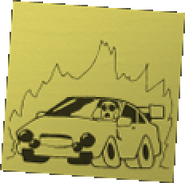 Jackin' Chan
Add a photo to this gallery 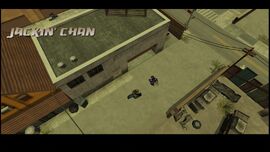 Huang arrives at Chan's garage, but he don't finds him. Two of Chan's men comes out of his garage. 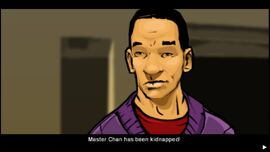 One of them says Chan has been kidnapped. 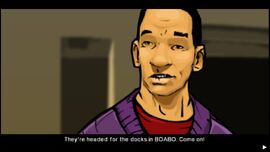 And they're headed for the docks in BOABO. 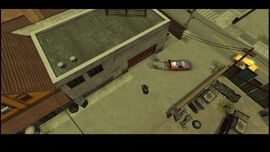 Chan's men heading to the docks. 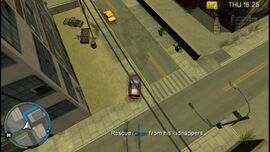 Huang heading to the docks. 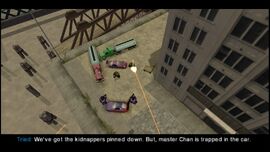 Huang find Chan's men in a shootout against the Irish American Killers and Chan is trapped in his own car. 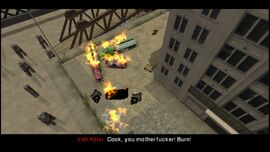 Then, one of the Irish Killers throws molotovs at Chan's car, killing the two Triad members. Now Huang needs to find a way to put out the fire. 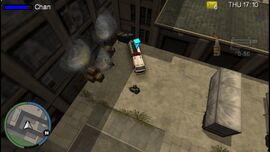 Huang steals a Fire Truck in a burning building nerby. 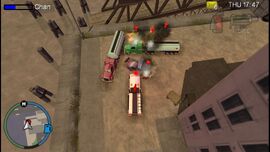 Huang goes back to Chan and extinguishes the fire. 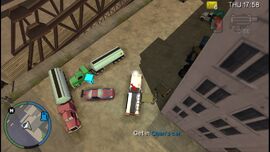 Huang gets in Chan's car. 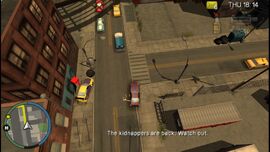 On the way home, more Irish Killers will try to attack Huang and Chan. 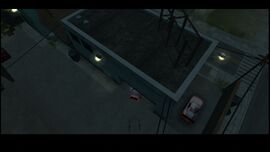 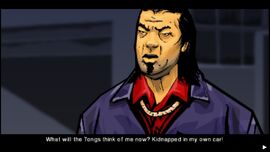 Chan says he will lose respect for the Tongs because of Huang. 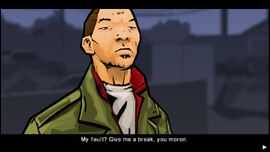 And it's obviously not his fault. 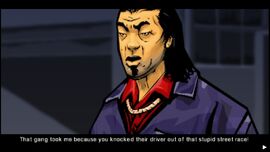 Chan reveals that those Irish Killers are actually the street racers from the race which Huang and Chan cheated. 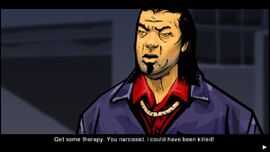 Chan calls Huang a narcissist and tell him to get some therapy. 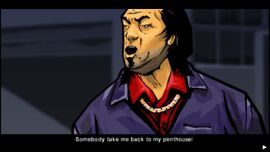 Chan asking his men to take him to his penthouse in East Holland. 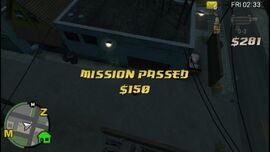 "Chan was kidnapped by friends of the race champ whose car he had me sabotage.

They tried to torch his car while he was locked in the trunk.

But, I managed to save him ... and then he blamed me for everything! Seriously, what an asshole."

Retrieved from "https://gta.fandom.com/wiki/Jackin%27_Chan?oldid=1189861"
Community content is available under CC-BY-SA unless otherwise noted.