View source
watch 02:52
Roblox: DeepWoken - The Loop
Do you like this video?
Play Sound
Not to be confused with Jackal Racing, a racing clothing company appearing in Grand Theft Auto Online.

Yes
“Modern and forward-thinking on the outside, trapped in the 19th century on the inside, the Jackal is as British as they come. More leather and wood paneling than any other luxury car in its class. But don't mention "class"...”

The car has a luxury, swept back profile and has an appearance similar to a 2011 Jaguar XFR and Maserati Quattroporte, especially the front fascia, bonnet/hood profile, different rear lights, fascia, and side air intakes (which are mostly similar to a Maserati, which the other Ocelot model is based on). Some of the design has taken some cues from the Tesla Model S. The rear takes most of its design influence from the Opel Insignia (a.k.a. Buick Regal in the USA) and the second generation Saab 9-5, featuring a chrome strip connected to stylized C-shaped rear light units.

The car is only painted in a single colour, which also affects the interior stitching. The stock wheels share the same rim design as the "Extravagano" SUV wheels also found in Los Santos Customs, but there is an extra circular part behind the spokes, which is unique to this set.

The overall performance of the Jackal makes it an excellent choice for a getaway vehicle. The engine sounds to be relatively low revving, and manages to propel the nearly-four thousand pound Jackal off the line quickly, making for an impressive 0-60 time. It corners surprisingly well for such a big sedan, making the Jackal a rather fun and exciting vehicle to drive, and acceleration and braking is very good as well, although under stress it does have a tendency to lock the front brakes up. The Jackal is also well-built, meaning it can take a number of hits before being disabled. Top speed is acceptable, but nothing spectacular. 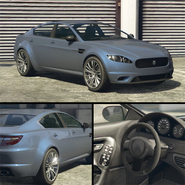 The Jackal on the updated Rockstar Games Social Club.