Jack Sheepe is an agricultural company with a minor presence in the HD Universe. So far, only one of its vehicles has appeared in the series, being the Lawn Mower.

Jack Sheepe has a servicing center by McKenzie Field in Grapeseed, which is indicated by the large "Jack Sheepe Servicing" signs found at the location. Under one of these signs is the text; "Tri-Manifold R-108 MKII". It is unknown if this is the name to a Jack Sheepe vehicle, perhaps the Lawn Mower or the name of an engine used in Jack Sheepe vehicles.

The company title is stylized as "Jacksheepe" when selecting a Lawn Mower during a GTA Online race.

Jack Sheepe is very clearly based on John Deere, giving that Jack is a common nickname for John and a sheep is just another animal with two "e"s, but with an "e" on the end. Its logo is also Similar to John Deere, but in a oval shape, flipped horizontally and the deer being replaced with a sheep.

Its only vehicle, the Lawn Mower, seems to take inspirations from John Deere mowers, mainly the LX models.

The brand might also have minor influence from New Holland, based on the design of the Lawn Mower and the fact it can spawn in blue colours. 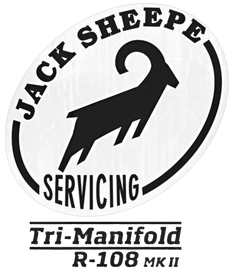