Randy Pearlstein
“I'm back bitches... and there's nothing you can do about it.”
— Jack after his release from prison in 2013.

Jack Howitzer is an actor that appears in both the 3D Universe and HD Universe. He claims to have appeared in over 40 films before his prison stint. Howitzer's most notable role was as Tim, a war hero from the Evacuator films.

Jack Howitzer's earliest known film, Loincloth, was released in 1984. He also appears on the radio that year in a commercial for Little Lacy Surprise and as an imaging voice on Emotion 98.3. In 1986, he appeared in the Evacuator sequel, titled Exploder: Evacuator Part II. In the next three years, he appeared in films titled Annihilator, and Zero Seconds to Death. Howitzer also frequently used steroids during his film career, leading to many film critics and talk show hosts mocking the fact they had apparently shrunk his genitals.

By 1989 Howitzer's popularity had eventually declined and his career slowed down. He released Special Needs Cop in 1992, a severely politically incorrect film in which he endangers the lives of special needs children and other innocents. He also became delusional, believing that his movies were real and the Soviet Union could still attack (despite the fact they had collapsed in 1991). In 1992, He was interviewed on WCTR's Entertaining America show where he accidentally and fatally shot host Billy Dexter (Jack thought that his gun wasn't loaded), also shooting at others on the scene. Jack was later put on trial for murder and faced the death penalty, although the outcome of the trial is not revealed. When interviewed by WCTR in a Los Santos prison awaiting trial, he admits to killing the original Ho Chi from the Exploder movies, also demanding his cellmate act like him.

In GTA IV, the Weazel News website in The Ballad of Gay Tony reveals that Howitzer instead served 15 years in prison for shooting Dexter, was paroled by 2008, and was now set to have his own reality show. (Although main characters from 3D Universe were confirmed not to appear in the HD Universe, celebrities such as Lazlow, Fernando Martinez, and Derek the Dodo are reused entirely in canon).

Despite being paroled in 2008, sometime between 2008 and 2013, he had a car accident while under the influence of drugs and/or alcohol, and Howitzer was sent back to prison.

By 2013, Howitzer was finally released from Bolingbroke Penitentiary. He is still clearly disturbed and uses "Ho Chi Sock", a sock puppet dressed as an Asian, to cope with his situation, as well as continuing to believe that the 1980s aren't over. According to him, the mid '80s to the early 1990s was the greatest time in the history of America. Howitzer is seen living in a room at The Motor Motel and is being filmed as part of a reality show. In the show, a talent agent named Rufus Bellows is trying to talk Jack down from doing anything impulsive and to pitch a comeback film about Jack Howitzer, though apparently no one wants to be a part of it or make it, presumably because of Howitzer's current unpopularity, his mental and emotional instabilities, and because the script is apparently too dated for the present day.

As part of the show, Rufus gets Jack to set up a Lifeinvader and Bleeter account, and Jack is seen posting a response to Moe Chinpoko who is trolling his page. Jack is then seen burning down Moe's house in Mirror Park.

He has his own website in GTA V: JackHowitzer.com. 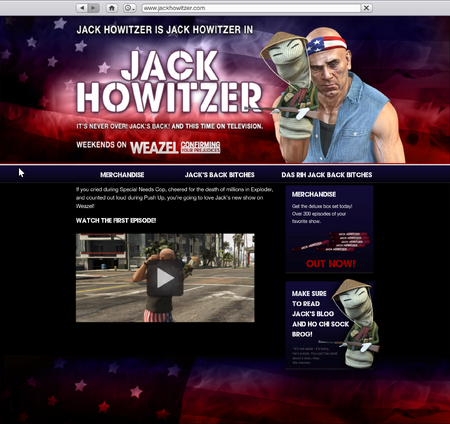 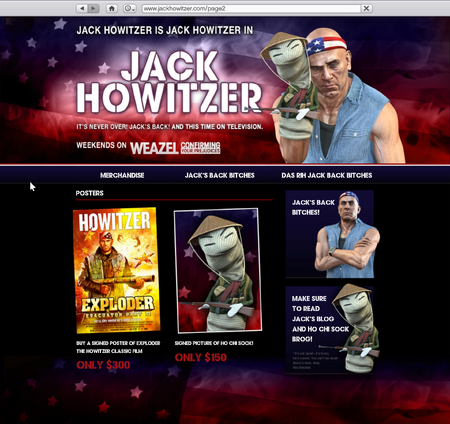 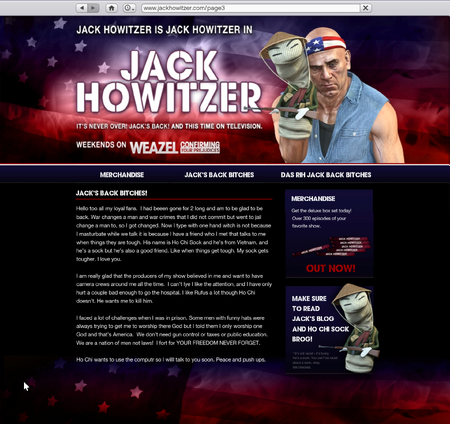 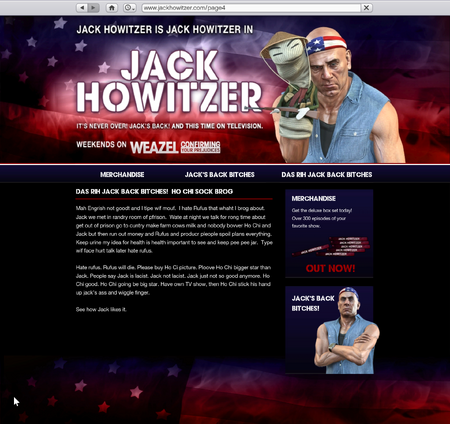 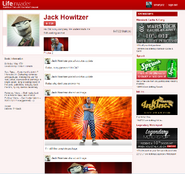 A second image from his real life Lifeinvader page. 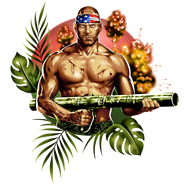 The graphic of the Howitzer Tattoo in Grand Theft Auto Online.

Being chased in his old Ruiner through South Los Santos after his first prison release.

Arrested for a crime he probably did commit.

His in game (shown on TV only) Lifeinvader profile.

Threatening an internet troll on Lifeinvader.

Leaving the scene in his orange Ruiner.