Standard White - 100%
“Grease up the drive shaft because this hot number has curves in all the right places. A classic luxury grand tourer, the JB 700W has been the car of choice for drunken misogynistic British spies since 1965. Dust off the tuxedo, quip a sexual double-entendre, pour yourself a martini for the road, and stumble out as everyone in the room mutters what a turd you are.
Note: The vehicle's classic concealed weapons can be recommissioned for recreational use at LS Customs.
”
— Warstock Cache & Carry description.

The Dewbauchee JB 700W is a classic grand tourer featured in Grand Theft Auto Online as part of the continuation of the The Diamond Casino Heist update, released on December 26, 2019, during the Festive Surprise 2019 event.

The vehicle is essentially a weaponised version of the JB 700, where the original machine guns are add-ons. This gives the front quarter panels a smoother appearance, with small hatches covering the portions serving as the gun mountings. Aside from a wooden strip on the passenger side of the interior, the vehicle is largely identical to its base model, keeping all the distinctive features from the former. It also retains the single colour scheme and the wheel design.

Performance-wise, the vehicle is identical to the regular JB 700, having decent acceleration and an excellent top speed. The vehicle's relatively light weight and low profile make it a stable car, but it is prone to oversteer at high speeds due to its RWD drivetrain. Crash deformation is impressive, as the JB 700W can take multiple head-on collisions and much gunfire before the engine fails. 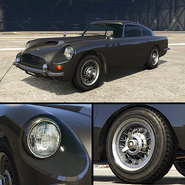 The JB 700W in the cinematic preview on Rockstar Games Social Club. 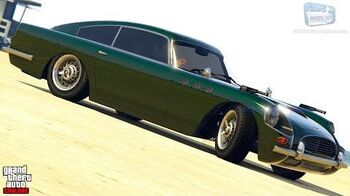