No
“Grease up the drive shaft because this hot number has curves in all the right places. A classic luxury grand tourer, the JB 700 has been the car of choice for drunken misogynistic British spies since 1965. Dust off the tuxedo, quip a sexual double-entendre, pour yourself a martini for the road, and stumble out as everyone in the room mutters what a turd you are. For safety reasons this vehicle's concealed weapons have been decommissioned.”
— Legendary Motorsport description.

The JB 700 takes traditional styling from a number of British cars, namely the Aston Martin DB5 in the overall body shape, long front and greenhouse, with styling cues from the Aston Martin DB4 and Aston Martin DB4 GT Zagato in terms of headlamp housings and grille (although the JB 700 uses a more ovular grille in comparison to the GT Zagato). The vehicle is specifically inspired by the classic Aston Martin DB5 driven by secret agent James Bond in several movies, most notably Goldfinger and Skyfall.

The car features very strong British-Italian design elements from the 1960s. In the front fascia, a classic full-chrome bumper is mounted, with two overrides used as decorations mounted along the bumper, besides the large ovular grille. The chrome bumper bends around two distinctive fins that slightly stick out of the main bodywork. These body panels follow with the curvature of the two lighting units and side fenders. The vehicle features two distinctive circular headlamps housed with large glass cover, curving down the vehicle's front. The grille is a 7-bar ovular shaped inlet, with the radiator being notably close behind it. On the underside of the front fascia are three other intake grilles using honeycomb-style mesh, with chrome lining finishing them. Side indicators are located directly underneath the headlamps. On the bonnet is a large bonnet-intake for the carburetor inlet manifold on a V12 engine underneath. The front of the intake is chrome plated.

Along the side fenders are three side mesh intakes for the engine cooling system, which are placed notably far back when compared to the engine and its inlet system. On the top of the front fenders are classic circular mirrors coated in chrome paint. The front window's gradient is notably high, giving it a very sleep look for its rear quarter, where the entire rear box consists of one largely curved B-pillar. The vehicle also features a small window channel after the door. Black rubber trims surround the door and windows in the side and rear areas. The vehicle also features a small chrome door handle, shaped like the traditional Aston Martin DB5. On the roof are two faint lines highlighting the points at which the entire roof can be ejected from the vehicle.

In the rear quarter, there is a distinctive chrome bumper that curves around the entire rear, reaching almost as far as the rear wheels. The rear bumper also features overrides, which lip over the boot of the vehicle. On the boot is a silver lettering reading "DEWBAUCHEE", as well as the company logo. The handle of the boot is stylised as a large chrome bar mounted inside the curvature of the boot impress. The rear features a large curve outlining the rear of the greenhouse which is met even before the hinged end of the boot - a portion of the boot is part of the rear greenhouse bodywork. The rear features a simplistic rectangular window. The JB 700 features twin exit exhausts, sticking out largely, with discrete silencers mounted directly underneath the boot. The underside features a basic single-diff driveshaft coming from the engine block at the front of the vehicle. The car also features a wishbone suspension system. The exhaust system is a relatively simple 4-1-2 layout, 4 into 1 main exhaust, before splitting once more into two exhaust tips. The exhaust tips are finished in chrome.

The vehicle can only be painted with a single colour for the body. The car features classic wire wheels by default, with a triple blade spindle knock on the wheel nut, all finished in chrome. The car appears to share similar, if not identical wheels to the Stinger, Stinger GT and Z-Type, cars that all originate from similar eras (being similar to the "Wired" lowrider rims available in Los Santos Customs). The tyres are low-profiling when in comparison to other vehicles.

During the missions Deep Inside and Pack Man, it is revealed that the JB 700 is equipped with dual machine guns mounted above the front quarter panels, caltrop dispensers under the rear bumper, a retractable bullet-proof shield just behind the rear window (not usable or featured in the game whatsoever), and the passenger seat can also be ejected through the roof of the vehicle. These gadgets are not usable outside the aforementioned missions, despite the guns being a permanent component.

The JB 700 features an FR layout. It is powered by a naturally-aspirated, 6-double barreled Carburetor V12 engine, with single overhead camshafts, which is capable of providing decent acceleration and an excellent top speed. The vehicle's relatively light weight and low profile make it a stable car, however, it is prone to oversteer at high speeds due to its RWD drivetrain. Crash deformation is impressive, as the JB 700 can take multiple head-on collisions and much gunfire before the engine fails. It is also one of the best drifting cars in the game. Its top speed is shared with the Stinger.

A white JB 700 in the original version of GTA V. (Rear quarter view)

The JB 700 as seen in the second GTA V trailer.

Pre-release screenshot of the JB 700. 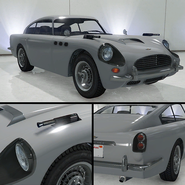 The JB 700 on Legendary Motorsport in the enhanced version.

The JB 700 on the updated Rockstar Games Social Club.

The JB 700 in the cinematic preview on GTA V Rockstar Games Social Club.

The JB 700 in the cinematic preview on GTA Online Rockstar Games Social Club. 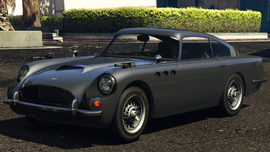 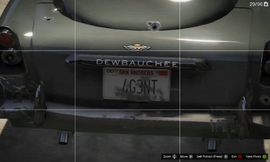