View source
For other uses of the name, see Ivan (disambiguation).

Lev Gorn
“No man, this means something. I'm the big shot money lender who screws his hot apple pie American fiancee three times a week. And you still ain't made it yet. But you're the one saving my life.”
— Ivan Bytchkov to Niko Bellic at the end of his random encounter.

Ivan is a member of the Faustin Bratva led by Mikhail Faustin, and is a personal henchman of Vladimir Glebov. Within the crime syndicate, Ivan works both as an enforcer and as a burglar.

Ivan Bytchkov was born in Russia, circa 1966. He emigrated to the United States of America in the early-1990s. He settled down in Hove Beach, a neighborhood mostly populated with Eastern European immigrants like himself.

By the early-2000s, Ivan was already involved with Mikhail Faustin's Russian Mafia, where he formed a close friendship with the loan shark Vladimir Glebov. He was arrested twice, once in 2000 for embezzlement, and again in 2004 for burglary.

By 2008, Ivan is still a major enforcer for the Faustin Bratva. He meets up with Vlad at the latter's Comrades bar. The two conclude the meeting with a friendly embrace as Vlad's new associate, Niko Bellic, approaches them. Niko would later joke with Vlad that Ivan is the latter's boyfriend.

Vlad then orders Niko, who happens to be Roman's cousin, to assassinate Ivan. As Niko arrives at the taxi depot, Ivan spots him, gets in his Ruiner and flees. Niko gives chase, resulting in Ivan crashing his car at a construction site.

Ivan attempts to escape via the rooftops, leaping from one building to another, only to be trapped dangling off the edge of a destroyed fire exit. At this point, Ivan begs Niko to save him, leaving the player the choice of either killing Ivan or sparing him.

Should Niko spare Ivan from his fate, he would help the Russian mobster to get back on his feet. Ivan will thank Niko and, taking his advice, leave Hove Beach "to go to the real America". 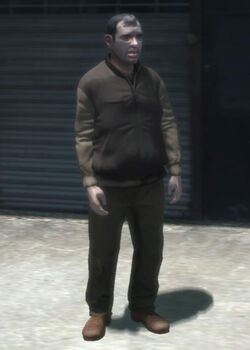 NOTE: This random encounter is only available by sparing Ivan in the mission "Ivan the Not So Terrible".

Ivan: "In-fucking-sane. You saved my ass again. You animal! Awooo!"
Niko: "Don't worry about it."
Ivan: "No, this means something. I'm the big shot money lender who screws his hot apple pie fiancee three times a week. And you still ain't made it yet. But you're the one saving my life. Hang in there, man, this should help. And this is a gift. Believe it, baby!"
Niko: "Thanks. I'll try to hang in there... I guess. Enjoy the dream."
—Ivan and Niko parting ways.

After being saved by Niko, Ivan cuts ties with the Russian Mafia and decides to move to Alderney, where he starts a money lending business, mainly operating within and around Acter. By the time he encounters Niko Bellic for the second time, Ivan has heard about Vlad's disappearance, unaware that the man who wanted him dead was murdered by Niko.

Ivan meets up with Niko again sometime after the opening of the Alderney-Algonquin bridge, on Mueri Street. He holds no grudge against Niko for trying to kill him, being more grateful for Niko sparing his life. The two exchange words regarding their latest activities, where Ivan reveals his new profession as well as the fact that he has met, and is now engaged to an American woman. Afterwards, Ivan asks Niko to come with him to collect money from several Hustlers.

Ivan and Niko meet up with the hustlers near the Lost MC Clubhouse, there, the hustlers decide they're not going to repay their debts, revealing an ambush set up for Ivan. Despite being outnumbered, Niko and Ivan are able to kill the hustlers and collect Ivan's money. Ivan, once again grateful, awards Niko with a share of the money.

NOTES
- Immigrated to the US from Russia in early 90s. 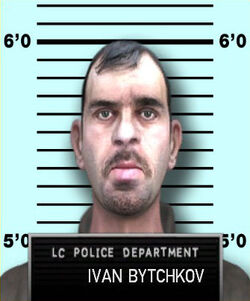 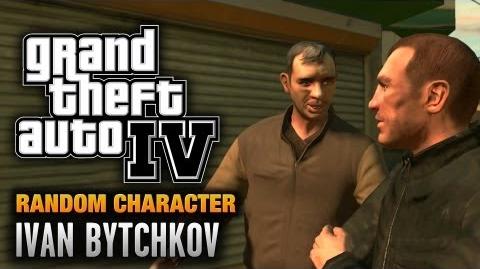 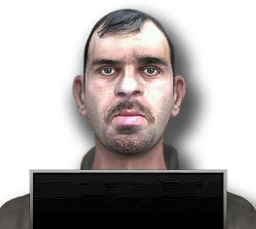 Police mugshot of Ivan, as depicted on a police computer in GTA IV.