Standard White - 100%
“Warning: NSFW. There's a sexy single car in your area looking for a ride. Interested? Just open a private tab and check out these candid pics of the RSX's sultry bodywork, hourglass waist, soft front, and silken A-line. But before you take it to the next level and see what's under the hood, turn off your webcam and mute your mic. The conference call you're ignoring is about to see your o-face.”
— Legendary Motorsport description.

The Grotti Itali RSX is a sports car featured in Grand Theft Auto Online as part of the continuation of The Cayo Perico Heist update.

The Itali RSX is primarily based on the Ferrari SF90 Stradale, with hints from the Ferrari F8 Tributo, mainly for the bonnet and the streamlined side profile. Some modification parts may be derived from the Lamborghini Centenario, such as the splitters and side skirts.

The Itali RSX is clearly distinguished by its aerodynamic profile, where the front end features large carbon-fibre splitters with a central section connected to them and small fins on the outer edges. The front intake is slightly narrower around the centre and has two central separations on it, which are in line with the vertical sections of the dual splitters. The bonnet area is mainly composed of the narrow headlamps with inner LED strips, a front boot with small ducts and a manufacturer emblem on the front, along with plastic/carbon-fibre details near the windscreen. The boot opens to reveal a small luggage compartment.

On the sides, the car uses rectangular lights on the front quarters and carbon-fibre skirts on the bottom sides, as well as sleek mirror wings on the doors that are connected to the car by plastic frames. Concave formations with side intakes can be seen around the rear section, with the lower ones directing airflow to the rear brakes and the upper ones to the engine bay. The roof features a small vortex generator/tail fin, while the rear area has an openable compartment with a small window on it, revealing the engine and the protective frames. It also features a functional aerodynamic spoiler on the rear end, which is mounted on an elevated support wing and folds up as the car gains speed.

The rear end of the vehicle features a set of rectangle-shaped tail lamps, consisting of red outer strips and inner reverse lights, together with a single third brake light strip on the spoiler. The centre of the car bears the corresponding manufacturer emblem and two rounded titanium exhausts, along with large exit vents that sweeps upwards to the outer edges and thinner vertical vents on either side. The lower area is mostly occupied by the carbon-fibre diffuser with numerous fins on it. The underside of the car is mostly carbon-plated, leaving the rear axle exposed.

The vehicle uses the same "Itali White" interior as the Itali GTO, being a derivative of the "Nero White" interior used in the Nero, the Nero Custom and the XA-21. The area below the windscreen is also longer than most vehicles with the same interior.

The primary colour of the car is applied on the bodywork, while the secondary colour is applied on the splitters, part of the stock rims, and the detail of the engine. A trim colour is also available for the dashboard, doors and seats. It uses a unique set of wheels with 6-spoke black rims, which is derived from the 5-spoke ones on the SF90 Stradale, and low-profile tyres. 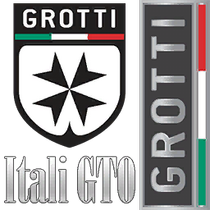 The Itali RSX is an excellent vehicle in standard land racing, it has a very high top speed that can beat a majority of vehicles from the Super Vehicle Class and has better than average acceleration, almost on par with the Itali GTO. It has an active aerodynamic wing that activates shortly after acceleration, however it doesn't seem to have a massive impact on performance or braking power. The Itali RSX's handling is slightly unstable, causing road imperfections to be much exaggerated which will make the car more prone to spinning out. Crash deformation is exceptional, the main bodywork doesn't deform much, but the hood and both doors are easily detached after a few collisions. If the vehicle is damaged too much, the aerodynamic wing will no longer activate, somewhat hindering handling capabilities. 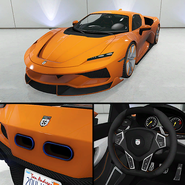 The Itali RSX on Legendary Motorsport.

The Itali RSX in the cinematic preview on Rockstar Games Social Club.