Standard White - 100%
For vehicles with similar names, see Itali (disambiguation).
“Lithe, focused, aggressive: if you've ever made passionate love to an angry jungle cat, you'll have an inkling of what it's like to take Progen's new Itali GTB out for a gentle spin. And if you've ever made passionate love to a stripped down, track-ready jungle cat with a massive rear spoiler, you'll have some idea of what Benny can do to this thing.”
— Benny's Original Motor Works description.

The Progen Itali GTB Custom is a custom vehicle featured in Grand Theft Auto Online as part of the Import/Export update, released on January 10th, 2017, during the Itali GTB Week event.

“If you've ever made passionate love to an angry jungle cat you'll have some idea of what Benny can do to this thing.”
— Rockstar Newswire description.

The Itali GTB Custom is a custom variant of the Itali GTB, appearing to be based on the McLaren 650S GT3 and 570S GT4/Sprint. The rear end takes design cues from the McLaren P1 GTR.

The vehicle features a custom bodykit intended for motorsport racing, sharing the same bodywork and most of the distinctive features. The front end has an extended splitter with a driver-side racing hook directly mounted over the intake, while the front trunk features an intake duct on the centre. The sides retain the same features as the standard version, but has bolt-on extended arches and smaller mirror wings, which are directly mounted over the A-pillars. The rear end is drastically different in comparison to the standard version, featuring a rearranged lightweight fascia with a third brake light on the centre and two titanium exhaust tips near the rear light strips, along with the central license plate and the driver-side racing hook. It also has a smaller, larger rear diffuser, with no apparent sight of a reverse lamp on it.

Its interior is shared with the Comet Retro Custom, itself being a variation of the one used in the regular Itali GTB and the Comet. It can be also modified to have a race-style interior and a digital display, in a similar manner to cars like the RE-7B and the ETR1.

Colour distribution is similar to the regular Itali GTB, with the primary one being applied on the bodywork and the interior stitching, and the secondary one on the roof and the pillars. A trim colour is also available for the interior, as well as a dial colour. It uses the same wheel design as the regular Itali GTB, being five dual-spoke rims with a circular centre, wrapped in low-profile tyres.

The car receives upgrades in speed and acceleration, where the files list the car as being 0.2 km/h faster than the regular Itali GTB. The car gains upgraded handling thanks to the weight reduction. The car is susceptible to quite a bit of understeer, most likely due to the AWD drivetrain. It is marginally quicker overall than the Banshee 900R.

Like the regular Itali GTB, the engine model appears to be the same single-cam V8 engine found on vehicles like the Cheetah, the Turismo R and the T20, coupled to a 6-speed gearbox in a mid engine, all wheel drive layout (30-70, front to rear distribution). The engine sound is typically high-revving, identical to the one used in the Cheetah. 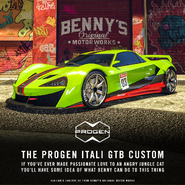 The Itali GTB Custom on GTA Online Rockstar Games Social Club, which was incorrectly used as the cinematic preview image of the Itali GTO.

Dr. Dre owns a red Itali GTB that was present during the final part of Don't Fuck With Dre, if the player was playing alone, and was used by the player to drive Dr. Dre back to Pacific Bluffs Country Club.