Standard White - 100%
For vehicles with similar names, see Itali (disambiguation).
“Lithe, focused, aggressive: if you've ever made passionate love to an angry jungle cat, you'll have an inkling of what it's like to take Progen's new Itali GTB out for a gentle spin. And if you've ever made passionate love to a stripped down, track-ready jungle cat with a massive rear spoiler, you'll have some idea of what Benny can do to this thing.”
— Benny's Original Motor Works description.

The Itali GTB resembles a Ferrari 348 GTS. Its name is a parody of Italy, where Ferraris are made.

The design of the car is very simplistic, with a small front compartment and a black portion on the roof.

The Itali GTB returns to Grand Theft Auto Online and is mostly based on the McLaren 570S (front and rear facade) and Trion Nemesis (rest of the body). It also features some cues from the McLaren 650S.

Featuring an aggressive styling and rounded design, the Itali GTB is distinguished by the large intakes on the front, with carbon-fibre inserts and separations on the lower side and a curved shape above. The upper area is occupied by triangle-shaped plastic housings on the outer sides, which contain seven circular lamps and amber strips on the upper edges, along with a chrome detail that splits the six innermost lamps. There is an openable front trunk with a relatively simple design and has silver "PROGEN" lettering on the front.

The sides of the car have distinctive bulky arches and ridged skirting area, followed by inset shapes passing through the doors and leading towards the rear fender vents. A set of body-coloured mirror wings can be seen on either door, mounted near the A-pillars. The greenhouse area is slightly angled towards the front, having black window trimmings and black separations between the door windows and the rear-quarter windows. The rear window leaves a small cut-out on the upper side that is intended for the extended roof panel, and also exposes part of the engine bay. The rear area is relatively simple in appearance and has an openable engine compartment on the centre.

On the rear, the car makes use of a small exit vent on the centre and two large ones on the outer edges, the latter housing a set of red circular tail lamps and upper light strips. The middle section has an inset area for the license plate and an additional set of red lamps below the outer vents. The lower area is predominated by a single rear-exit vent with dual-exit, dual exhausts on the outer sides, followed by a carbon-fibre diffuser with a single reverse light on the center. The car shares the same interior with the Comet, although it uses the corresponding Progen badges on the horn cap.

It is fast, yet its handling and durability are poor, sharing the same attributes as the Itali GTO.

Even without upgrading to its custom variant, the Itali GTB performs exceptionally well in races with excellent handling due to its AWD nature. Durability is fair but can become problematic after taking hard collisions from heavier vehicles.

The engine model appears to be the same single-cam V8 engine found on vehicles like the Cheetah, the Turismo R and the T20, coupled to a 6-speed gearbox in a mid engine, all wheel drive layout (30-70, front to rear distribution). The engine sound is typically high-revving, identical to the one used in the Cheetah.

The Itali GTB on the updated Rockstar Games Social Club.

The Itali GTB in the cinematic preview on Rockstar Games Social Club. 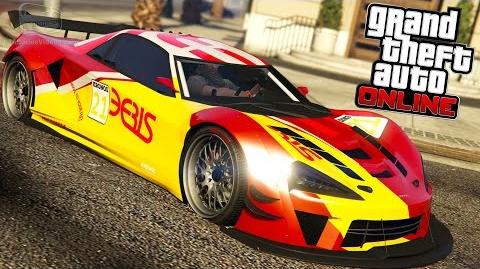