Rescuing Gerald from the LSPD

In-game time
“That Lamar in that headset? Tell the lanky motherfucker he fucked up, big time.”
— Gerald

It's a G Thing is a mission in Grand Theft Auto Online, and is the third mission given by Lamar Davis in the Lowriders update.

“Hey, they get you, my ni**a? Cough twice if there's one time on the line.
No? Well, they got Gerald. Man, he's locked up, man. They about to be airlifted to a secure facility. [Spoken:'They about to airlift him to a secure facility']
All 'cause of that thing we did for Vernon.
So, you goin' have to go on over to Strawberry, man, we goin' boost the homie before he flies... or Vernon flies off the handle.


”
— Lamar
A new Lamar mission is available at

“Rescue Gerald from police custody before he's airlifted out of the state.”
— Level Description

After the deal went wrong in from the previous mission, Lamar Davis will call the player to let them know that Gerald has been arrested, apparently by some consequences from the botched sale (which Lamar can't fathom how the incident led to this), and he'll be transported in an aircraft out of Los Santos. Lamar then requests that the player bust him out and take him to a safe place near Del Perro Pier.

The players will start at Mosley Auto Service and be instructed to head over to the airport where Gerald is being escorted by the LSPD to be airlifted out of San Andreas. Lamar supplies the players with Sticky Bombs needed to blow open the rear doors of the Police Riot which Gerald is being transported in.

Upon arriving at LSIA, the players will need to ambush the escort and fit a sticky bomb onto the rear doors of the van to rescue Gerald. After picking up Gerald, the player may either lose the cops via ground or commandeer one of the aeroplanes readily available. Regardless, after picking up Gerald, he will subsequently go on a rant about Lamar's incompetence and how his reckless behaviour got him taken into police custody.

After evading the police, the player will need to take Gerald to the drop-off point where his lowrider is. Once done, a cutscene ensues with Gerald entering his lowrider and leaving the area. Once the cutscene is finished, the mission is complete.

Fitting a sticky bomb onto the rear doors.

Ushering Gerald into the plane.

Accompanying Gerald to the drop-off point.

Gerald leaving in his lowrider. 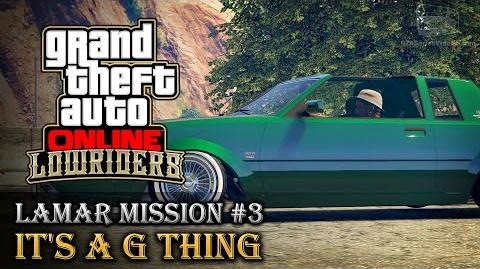