Johnny fighting off the Angels of Death.

• ­Take out the Angels of Death.

• ­Take out the Angels of Death.

Billy: "See, Johnny? I told you this truce meant norhing."
Johnny: "You're the one who wiped his ass on the truce to start with."
―Billy Grey and Johnny Klebitz lead the Lost to a war with the Angels of Death

It's War is a mission in The Lost and Damned given to protagonist Johnny Klebitz by Billy Grey.

This mission features a minor crossover with the mission No Love Lost from Grand Theft Auto IV.

The mission begins with Billy Grey talking to Dave Grossman, a member who is also a lawyer for Goldberg, Ligner and Shyster. Billy casually offers Dave a bong spiked with mescaline, which intoxicates him. Johnny enters and speaks to Billy privately about the club's business and their relationship. During the conversation, Billy receives a text message informing him that some members of The Lost are attacked by the Angels of Death. The club's members follow Billy to the ambush sites and kill many waves of Angels of Death members. After fighting off the second wave, the members regroup and Billy explains that Jason Michaels has been killed by an Eastern European in Broker. Billy gives a brief speech commending Jason's character and the group raises a beer in Jason's memory before smashing the empty bottles on the ground. Billy vows revenge and reminds the group of their loyalty to the club, whilst mainly looking in Johnny's direction. The group split up and the mission is completed.

"Liberty City's police commissioner has expressed fears that the war between two rival biker gangs, the Angels of Death and The Lost has claimed another victim; The body of Jason Michaels, a member of the Alderney chapter of The Lost was found in Broker and police believe that he was victim of a gang hit."

"A gas, leather, and crystal meth-fueled war is raging on the streets of Liberty City. It isn't nations fighting but rival motorcycle gangs battling for control of the streets. Men have died in this war, like The Lost biker Jason Michaels who was killed in Broker recently. How long is it going to be before innocent civilians are killed as well? Mainly thanks to the Angels of Death and their public relations efforts, biker gangs have taken on a much more friendly image in recent years. They appear in family-friendly movies and are romanticized in video games and TV shows. They are thought to stand for a noble rebellion against the norms of society. Be warned, this image is just a smokescreen used to cover up their real criminal agenda - sleeping with your wife and selling meth to your kids." 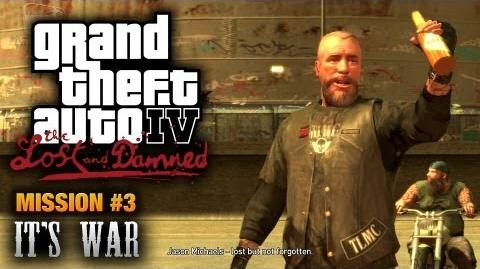 Retrieved from "https://gta.fandom.com/wiki/It%27s_War?oldid=1224566"
Community content is available under CC-BY-SA unless otherwise noted.