Standard White - 100%
“Underneath the hipster chic, you always suspected the Issi had a bad case of small car syndrome. Well, now the flat whites and ironic power pop are out, and the roll cage, carbon fiber interior and turbo charged four-cylinder are in. Just don't mention its height.”
— Southern San Andreas Super Autos description.

The Weeny Issi Sport is a newer, sportier, race variant of the Issi, featured in Grand Theft Auto Online as part of The Diamond Casino & Resort update.

The Issi Sport appears as a newer model of the Issi, which is heavily influenced by the 2020 Mini Cooper GP Concept, especially with the design of the spoiler, while the front bumper, side skirts and the bolt-on fenders seems to be derived from the Liberty Walk kit for the Mini Cooper. Some of the new design editions are likely based on the Mini Hatch 2018 facelift.

The Issi Sport shares the general design layout as the standard variant, but featuring an extensively modified bodywork. The front end of the car has a bumper with a small splitter below, a central intake with a tow hook on the centre and black housings on the edges containing small, unusable circular lamps. Its headlamps consist of LED circular strips and small, square-shaped lamps, also located in black housings. A small grille can be seen at the front of the bonnet, with the manufacturer's emblem above.

The sides of the car feature bolted-on arches, giving the car a wider profile, along with an intake next to the rear wheels. Its rear-view mirrors have a sleek profile and supported by black frames, as well as pillars finished in black.

The rear of the car features a set of twin red circular tail lamps, along with a single reverse light located on the black strip just above the number plate. Its rear bumper has a flat profile, together with a rear venter area at the bottom, featuring black frames and two circular exhausts. A large spoiler is installed by default, above the rear window.

The interior of the car features several race-type elements, being a digital display, numerous switches on the dashboard, race seats and a roll cage. The door panels are finished in carbon fibre, exposing the protective frames from the insides. Door pull straps can be seen, like many race vehicles.

The car's body, inner door frames and the stitching on the steering wheel are painted with the primary colour, while the trims found around the headlights, the rear-view mirrors, the trims around the door handles, the aircon units and the roll cage are painted in a secondary colour. The seats and the cage paddings are painted with the trim colour. Its stock wheels share the same rim design as the "Dash VIP" rims also available in Los Santos Customs, wrapped in low-profile tyres.

The Issi Sport can be considered as a step-up over its base model (as well as its classic iteration), as it carries the handling characteristics, but has overall better acceleration and top speed. The all wheel drive layout also helps at traveling dirt roads better, and it feels quite planted on tarmac roads, making it far less prone to oversteer than its two previous counterparts. And in an event of a spin-out, it can be easily corrected without too much trouble.

The Issi Sport has one (the eleventh) Advanced Flag enabled.[1] The purpose of this flag is unknown, but it appears to have little impact on performance.

The Issi Sport is stated to be powered by a turbocharged four-cylinder engine, although it has a V8 cover similar to the Issi. Said engine appears to be a carbon-fibered variation and has more details than most of the V8-style covers seen on many vehicles.

Official screenshot of the Issi Sport. 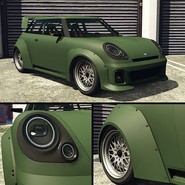 The Issi Sport on the updated Rockstar Games Social Club. 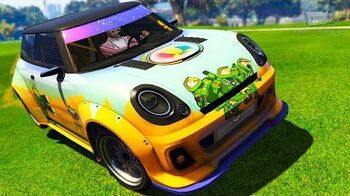