Standard White - 100%
“Sure, you could afford the latest Ocelot, or a vintage Enus - but you're not a show-off. You're just a slightly quirky, totally down-to-earth person looking for a way to tell everyone how slightly quirky and totally down-to-earth you are. Well, look no further, because for the last half-century the Issi Classic has been the closest thing on four wheels to screaming "I've got nothing to prove to anyone" in the face of every stranger you meet.”
— Southern San Andreas Super Autos description.

The Weeny Issi Classic is a compact car featured in Grand Theft Auto Online as part of the continuation of the Southern San Andreas Super Sport Series update, released on April 17th, 2018, during The Vespucci Job Week event.[1]

The Issi Classic is a caricature of the original BMC Mini for the overall shape and the rounded headlamps. The front facade overall seems to be inspired by the Trabant as seen in its square grille and square indicators, though the grille itself seems to reference the hexagonal designs applied upwards from the Mk. 2 Mini. The chrome design in its stock grille looks similar to the grille pattern found on the 1974 Mini Clubman SRV4, and takes some inspiration from some adaptations of the Morris Mini Cooper S for rally courses and the Mercedes avant-garde grille, while the painted options for the grille references earlier Mk. 1 models. Its door handles and tail lamps allude to the 1967-1970 Mini MK II. Its wide tyre profile and wide track compared to its body is reminiscent to variants of the Mk. 6 and Mk. 7 Mini, as well as its fender extension options. The vehicle's interior resembles the design seen in the Mk. 7 Mini Cooper, with the window-winders influenced from Mk III-onward Mini models.

The Issi Classic is easily distinctive by its compact design and relatively short wheelbase, where the lower area of the front end features a small extender with a black detail at the bottom, while the area above it extends forward and is covered by a chrome bumper with an European-style license plate on the centre. On the upper area, there is a rectangular grille with three horizontal separations and a vertical separation on its centre, a set of rectangular amber signals with a black detail around, and two circular headlamps with outer chrome and inner painted details around them. The small bonnet bears the manufacturer emblem on the front and a central detail on the upper side.

The sides of the car are denoted by the black details running through the sides, conforming the wheel arches and the skirting area. Small circular mirrors can be seen mounted on the front fenders near the A-pillars, while the doors use classic lever handles. The greenhouse area makes use of chrome trimmings around the windows, along with black details separating the roof area from the rest of the car. A fuel cap can be seen on the rear left quarter of the vehicle.

On the rear, the car makes use of a small boot compartment that holds the standard California-style license plate and a chrome detail above it, which bears the manufacturer emblem on the centre. The outer sides of the car houses circular tail lamps with chrome details around them, the upper ones being the main lamps and the lower ones the amber indicators. There is another chrome bumper with a thin black detail over it, as well as the single driver-side exhaust tube below.

The vehicle's interior is of a unique model, lined with wood trim similar to the Rapid GT Classic and GT500, as well as classic dials, racing needles and rounded aircon units. The central console features a small radio and a Meinmacht ICE screen, along with a classic 5-speed gear lever stick (despite the vehicle having only 4 gears). With the "interior" options in the "Chassis" category, the Issi Classic may adopt a modern, race interior with a digital display and race seats, similar to most race-oriented vehicles. The steering wheel also features a wooden finishing, as well as the manufacturer logo on the black horn cap.

As expected from a small, compact car, the vehicle is a very nimble, agile vehicle. Its "biggest" feature being its small size, allows it to pass through tight spaces, including through doorways into interiors, without trouble, similar in fashion to the Panto. As a result of its size, it is also one of the lightest four-wheeled vehicles in the entire game, allowing it to gain speed very quickly.

In terms of acceleration, the vehicle dominates most of the vehicles within the Compacts class, surpassing even the standard Issi, partially due to its lighter weight, but also down to a much faster shifting speed. On the other hand, its lack of a 5th gear prevents it from reaching its full potential, despite having a very high revving engine in comparison to the Issi, resulting in a relatively low top speed for its class.

The shortened wheelbase and small wheels give the vehicle very nippy handling and allow it to corner at an instant, and the front-engine, front-wheel drive configuration appears to give this vehicle excellent traction on the road, though turning a corner too aggressively will result the car to spin out very easily. Off-road wise, there is not enough traction to tackle steep, muddy hills. The narrow profile of its wheels also prove useful in off-road conditions. However, the lack of deep, off-road tread can often pose a problem to the driver. When the suspension is upgraded, all four wheels' camber will increase.

Like the Panto, the Issi Classic does not deform, presumably to prevent deformation-related glitches, but it does not take as few as 5-6 direct full frontal strikes[vague] from cars comparable to the Police Cruiser at high speeds before smoke begins to emit from the engine.

The Issi Classic has all four advanced flags enabled[2]:

The Issi Classic appears to be powered by a very high-revving single-cam, transversely laid inline-4 with a mounted air filter and functioning timing belt. Like the real-life Mini, the engine is mounted in a front-engine, front-wheel drive configuration, coupled up to a 4-speed gearbox. Its engine sound appears to be shared with the Stinger, Stinger GT and 190z, but an extra exhaust note gives the engine an aggressive tone, similar in tone to the GT500. Interestingly, the vehicle appears to over-rev between shifting, causing the vehicle to pause, in a similar manner to the Duneloader. This issue is apparent in most of the vehicles added in the Southern San Andreas Super Sport Series update.

Its traction can be slightly increased with any "Spoiler" modification. This also applies to the roof racks, despite not being technically spoilers. 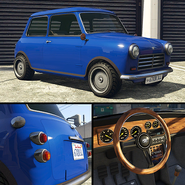 The Issi Classic on the updated Rockstar Games Social Club.

Official screenshot of the Issi Classic. 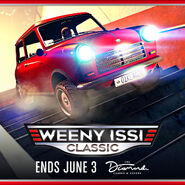 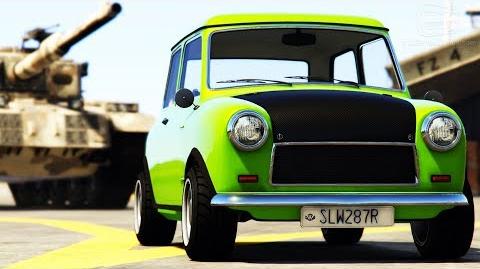 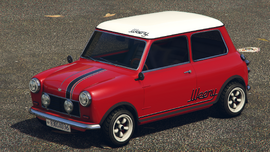 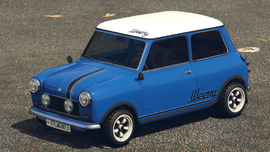