The design of this car is German in nature and is significantly inspired by the styling of a 2001-2007 Mini Hatch. Its headlamps, however, resemble those of a Porsche 911 (996). The front fascia resembles that of the Fiat 500, albeit with a different grille design. The tail lights are adopted from the Mini Clubman, but also strongly resemble those of a Smart Fortwo, a car known for its tiny size.

The Issi is one of the smallest civilian cars, with a narrow body, compact wheelbase, short length and low height, making it very agile and able to fit through tiny spaces. Its front end is quite predominated by the front bumper, with a black matte portion surrounding the intakes and circular lamps. Chrome housings can be seen on the outer edges, holding the main circular lamps, smaller fog lamps on the inner side (that also work as daytime running lamps) and turn signals below. Thin grilles can be seen in front of the bonnet, also bearing the manufacturer's emblem above.

The sides have a simplistic design, featuring black matte wheel arches, small skirts and rear-view mirror shells finished in carbon fibre and supported by black frames. The greenhouse area features chrome trimmings around the base, black matte framing around the windshield and a soft, retractable roof.

The rear of the car is simplistic as well, featuring a large bumper, a small chrome line on the bonnet just above the license plate, and a set of circular lamps surrounded in chrome. There is a black matte portion at the bottom, featuring a rear mesh and mouldings for the circular exhaust tubes.

The primary colour of the car is applied on the bodywork and the stitching found on the steering wheel and seats, while the secondary colour is applied in the form of a stripe on the bonnet. Its stock wheels have 5-spoke rims with a pentagon-shaped black matte portion surrounding the centre of the rim.

The Issi is powered by an inline-4 engine model, boosted by a supercharger (made apparent by the sound of a supercharged whine), similarly to the 2005 Mini Cooper S on which this quirky supermini is based.

Though the engine is not exactly the mightiest of powerhouses (the car is defeated by any form of upwards gradient), the lightweight results in a rather nippy, chuckable little car that will corner superbly (if occasionally, oversteering around low-speed corners). Such handling characteristics that come with a short-wheelbased FF hatchback are complimented by rather potent brakes, and when performance driving this can make even an exotic coupé.

Its downside, however, are spin-outs due to the Issi's somewhat sensitive steering, especially at high speeds, as well as its weak resistance against high-speed collisions, often resulting its wheels to bend and greatly affecting its handling. The handling and its top speed is the most superior in its class beating the Panto and Blista, although this is not always entirely the case. The acceleration is dominated by its competitor, the Panto.

Unfortunately, the Issi suffers from poor durability and crash deformation, and 2-4 head-on collisions may render the engine useless or one of the axles bent. In addition, body panels (such as fenders, quarter panels, and bumpers) tend to detach quite easily during collisions and rollovers. 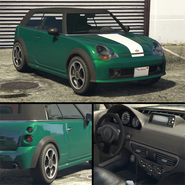 The Issi on the updated Rockstar Games Social Club.

The Issi in the cinematic preview on GTA V Rockstar Games Social Club.

The Issi in the cinematic preview on GTA Online Rockstar Games Social Club. 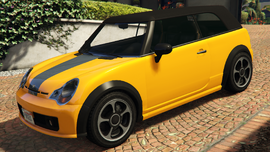