Dr. Friedlander is portrayed as an over-the-top version of a "Hollywood" psychotherapist. He's overpriced (as seen in an email where he raises his rates a reasonable 75%) and seems not to actually care about his patients. In cutscenes he's seen looking at his watch waiting for the session time to expire. He is also not concerned much about Michael's behavior as the latter confesses that he is able to kill without remorse and may have killed someone on the way to Isiah's home.

Dr. Friedlander also appears in the mission Reuniting the Family in which he listens to Amanda and Micheal argue about their relationship but makes no effort to intervene in any way.

Later in the game (in an optional visit), he tells Michael that he is leaving Los Santos and has gotten his own TV show. He then informs Michael that he needs to find a new therapist and implies that he's going to be using Michael's case in his show. Angry, Michael chases after Friedlander. Michael then has the choice to kill him or let him go.

Regardless of Michael's choice, an internet news article and radio broadcast will still say that he was murdered following his rise to prominence. 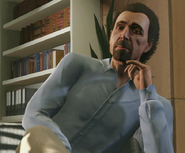 Retrieved from "https://gta.fandom.com/wiki/Isiah_Friedlander?oldid=569153"
Community content is available under CC-BY-SA unless otherwise noted.