Dr. Isiah Friedlander PhD is a renowned therapist based in Los Santos and appears as a supporting character in Grand Theft Auto V.

“With 9 out of 10 residents deeply reliant on some form of therapy or medication, this is the perfect time for a psychiatric evaluation with acclaimed psychotherapist and media personality Dr. Isiah Friedlander at his world-renowned practice on the beautiful Pacific Bluffs coastline.
Dr. Isiah Friedlander has been helping individuals, couples and families fill the void since 1987. He has won awards and been seen on multiple TV shows.
All you need is a willingness to change and an above average credit score.
No insurance accepted.”
— GTA V Digital Manual

On his official website, Dr. Friedlander is said to be a psychotherapist, media personality, secular Buddhist, and keen model boat enthusiast. In a conversation with Michael, Friedlander reveals that girls called him "pube head" due to his curly hair. Friedlander received a bachelor's degree in marketing from the University of San Andreas, Los Santos in 1984 and a doctorate degree in psychology in 1986 from an unknown defunct learning institution. He then began practicing psychotherapy in 1987. He has also traveled frequently in Asia.

Dr. Friedlander has been widely praised for exposing the culture of narcissism in the ganglands of 1980s San Andreas and also criticized for its "overuse of hyphens". He is a leading authority in the field of sociopathic personality disorder and has treated both celebrities and criminals. Friedlander has become one of the most respected and in-demand therapists in Los Santos as of 2013.

He was a regular contributor to a Mount Zonah Medical Center radio show called "Debrief Encounters" before it was cancelled, and was featured on the TV show Rehab Island as a psychological pundit.

Isiah Friedlander is Michael De Santa's therapist, whom he visits once a week. Friedlander has a clinic on the Pacific Bluffs coastline.

Dr. Friedlander is portrayed as an over-the-top version of a Hollywood psychotherapist. He charges exorbitant rates for sessions (as seen in an email where he raises his rates by a "reasonable" 75%) and does not appear to care much about his patients and their problems. During Michael's therapy sessions, he is seen looking at his watch waiting for the session time to expire. He appears unconcerned about Michael's behavior as the latter confesses that he is able to kill without remorse. He makes several Bleeter bleets further reinforcing his apparent disdain for his patients.

Dr. Friedlander also appears in the mission Reuniting the Family in which he listens to Amanda and Michael argue about their relationship, but he makes no effort to intervene in any way.

“All those fucking bitches who called me pube head! They'll be lining up to suck it now.”
— Dr. Friedlander revelling in his fame.

Later in the game (in an optional visit), he tells Michael that he has been offered his own TV show and will be leaving Los Santos. He then informs Michael that he needs to find a new therapist and implies that he is going to use Michael's case on his show. Angered by this, Michael chases after Friedlander. Michael then has the choice to kill him or let him go.

If killed, $2,023 can be looted from his corpse and an Internet article confirms his death. The internet article, posted in the news reel from Los Santos Meteor, reveals that Friedlander published details of Michael's sessions in a best-selling book, (using the alias "Marky De Santos") describing him as an "idiotic, if terrifying and amusingly deluded sociopath". This article still appears even if Dr. Friedlander is spared.[1]

If spared, after some time, Friedlander will send an e-mail to Michael. In the e-mail, Friedlander explains how sorry he is about what he did to Michael, but now he can help more people with his new radio program and TV show. He also says that he values the time spent with Michael and that they should both forget what happened between them and move forward. Michael has the option of replying to the e-mail; if he does so, he will threaten to kill Friedlander should they ever meet again.

Dr. Friedlander is likely based upon Dr. Sidney Freedman from M*A*S*H. The two are similar in name, appearance, and mannerisms (though Friedlander appears to care far less about his patients). This is one of two known M*A*S*H references in Grand Theft Auto V; the other being a quote by Jack Howitzer.

His image on the Affordable Healthcare page.

Isiah after being killed by Michael (Determinant). 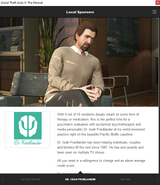 As he appears in the game digital manual.

Dr. Friedlander's logo in the manual. 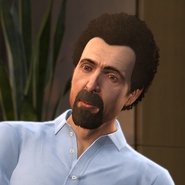 He operates www.dr-friedlander.com on the Internet in GTA V.

The home page outlining his services and a list of "Typical Conditions" he can treat.

A biographical section outlining his education and history.

A section detailing his past published history and appearances, as well as announcing his book SOCIOPATH - Inside the Mind of America's Most Deluded Criminals.

Do I Need Therapy?

A timed word-find puzzle requiring the participant to write down as many words of empowerment as they can on a piece of paper, followed by a a recommendation to seek help from Dr. Friedlander.

A group of short patient testimonials from: 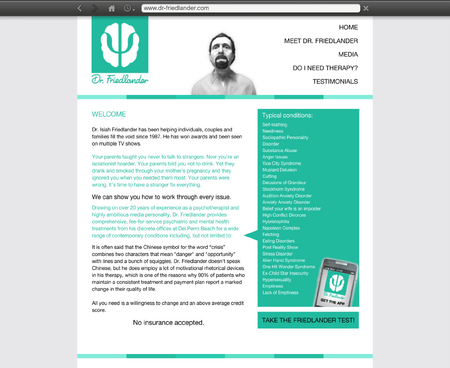 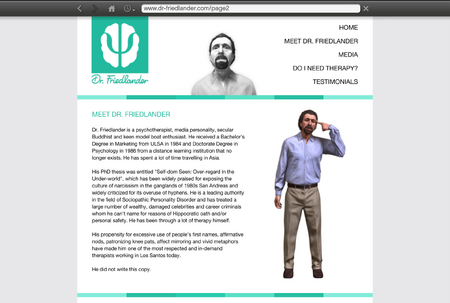 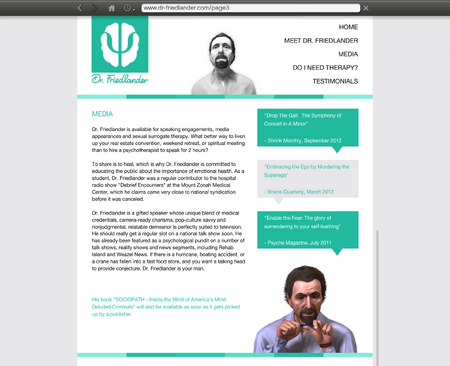 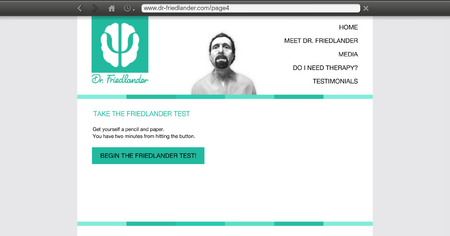 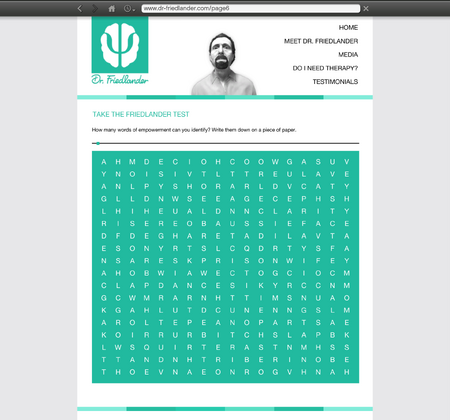 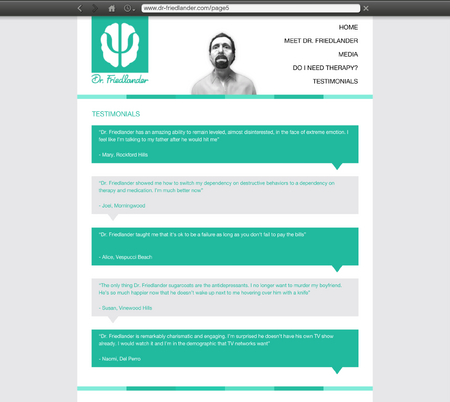