An Invade and Persuade Tank in Grand Theft Auto Online.

Standard White - 100%
“If blowing up virtual stuff excites you then just you wait until you've read this. Imagine an arcade game that was three-dimensional and had devastating destructive consequences. Welcome to real life! Bring the arcade to Los Santos with the Invade and Persuade RC Tank. It may be miniature, but it's still a tank.”
— Warstock Cache & Carry description.

The Invade and Persuade Tank is a remote-controlled tank featured in Grand Theft Auto Online as part of the continuation of the The Diamond Casino Heist update, released on December 25, 2019, during the Festive Surprise 2019 event.

The vehicle is basically an interpretation of the tank featured in the arcade minigame Invade and Persuade II. It has a rather worn paint job and the USA flag on the rear, just like in the arcade game. Its model file name is "MINITANK", which is befitting owing to its miniature size. It appears to be inspired by the SV-001 from the Metal Slug series.

The vehicle is only painted with a primary color, being applied to the entirety of the body and the road wheels, idlers and sprockets.

The vehicle has mixed properties between the RC Bandito and the normal-sized tanks: it accelerates fairly quick and turns reasonably well, but its top speed is lower compared to standard vehicles. Its suspension is kind of bouncy on curbs, bumps or other similar obstacles, owing to its rather stiff suspension and light mass. Similarly, it has poor climbing capabilities, struggling to maintain speed on moderately steep hills and ends up losing power, unless the handbrake is used to stop sliding back, then releasing it while holding the accelerator to regain speed. Owing to its small size and relatively thin profile, the vehicle can get through doors and enter interiors other vehicles cannot reach (though some interiors will automatically cause it to be destroyed).

Like the Rhino Tank and the Khanjali, the RC Tank is capable of easily running over civilians and other players, and can also potentially crush them if rolled on for too long. However, the RC Tank is incapable of crushing vehicles due to its small size, and is also prone to being knocked around by vehicles, especially if the player is wanted by the LSPD.

Overall, the vehicle is well suited for flat, stable roads and is more intended for combat in a limited area, as the vehicle cannot chase enemies efficiently. There are drawbacks regarding its minimap, namely that it automatically aligns its position only to where the front of the vehicle is facing.

The engine sound of the vehicle is the same one from the arcade minigame.

The vehicle comes with a power hop that allows the vehicle to jump. The vertical height gained is much more significant than that found on the RC Bandito, allowing it to scale small barriers and walls, and even reach the top of short buildings like suburban houses with ease. Like the RC Bandito and Nano Drone, the RC Tank maintains an off-radar feature; enemy players will struggle to detect its presence or miss it when the vehicle runs away (unless a homing missile launcher is used, which will target the tank like any other vehicle).

Despite its relatively compact size, the RC Tank is capable of withstanding several direct explosions from rockets and is practically unaffected by regular gunfire. When the vehicle is heavily damaged, a beeping sound can be heard to indicate this state, similar to the tanks and the APC. Sometimes, upon destruction of the RC Tank, the player remotely operating the vehicle may be wasted, giving the appropriate message and granting a kill to the attacker (tested on PC).

While impervious to bullet damage, fast-firing weapons, particularly Miniguns or minigun turrets, seem to slow down the tank considerably due to its light mass, difficulting the possibility to reach targets using these types of weapons.

The vehicle comes with a small turret that is operated in the same manner as tanks, having a fast rotation and elevation speed like the stock gun of the APC. The turret itself has a relatively limited elevation angle of 20-25 degrees, making it difficult to target even low-flying aircraft. This issue is also apparent when the tank is above the target's level, as it cannot aim downwards.

The Invade and Persuade Tank can be brought directly to Los Santos Customs or Beeker's Garage once deployed to be customized.

* Note the liveries are same as the ones released in the Gunrunning update, yet with worn textures. The US Army markings can also be seen around the vehicle. 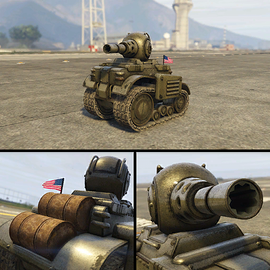 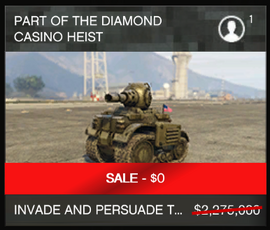 The Invade and Persuade Tank being sold for free on Christmas Day during the Festive Surprise event. 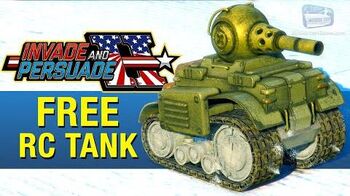