"America. The greatest country in the universe. But other countries threaten our freedom. They have our oil. It's time to take it back."
―Introduction

Invade and Persuade II is an arcade minigame released in 1992. It is available for one player in the Master Penthouse and the Arcade in Grand Theft Auto Online. Humorously, it is sponsored by RON Oil.

The game takes the form of a side-scrolling Shoot 'em up. When starting the game, it informs the player that while America is the greatest country in the universe, other countries threaten its freedom, as they have America's oil; and how it is time to take it back.

The player controls an American tank and needs to get to the end of the stage, where large quantities of oil are found. While the tank moves by itself. the player can move him left or right along the screen; it can also jump, which helps navigating the terrain and dodging enemies and their weapons. The tank also shoots automatically, but the player can move the barrel up or down to shoot in different directions. Score is presented in dollars; killing enemies, claiming oil barrels, and collecting money pickups increases the amount.

The tank starts each stage with a full health bar and three extra lives. While the health bar is comprised of 20 bars; each hit will deplete four. If the tank is hit while on four bars, it will drop down to a single red bar – the tank will start smoking and a sound indicating the low health will be played. Any further damage to the tank will destroy it, and the tank will either be respawned or the game will end, depending on whether or not there are extra lives left. After the game ends, the player is prompted to input their initials.

Along the way, different types of enemies and other hazards need to be destroyed or avoided. Smaller amounts of oil can also be collected, which give extra points and a small speed increase. The enemies in each mission are the same type, but take on different appearances depending on the location. The types of enemies and hazards the tank will encounter are:

Both downed bombers and Czech hedgehogs will harm the tank if it comes into contact with them, the former can either be destroyed or jumped over, but the latter cannot be destroyed. Pits must be avoided by jumping over them; if the tank falls into one, a life is lost. Raised terrain works in a similar manner to pits; if the player fails to jump onto the raised area and instead crashes into the side, the tank will be destroyed immediately.

At times, pickups will drop from the sky, which the player can either pick up or avoid. These are:

The flamethrower spits a continuous stream of flames, while the plasma cannon emits a continuous blue line in the barrel's direction. If there are enemies near the one being hit by the plasma, the beam may break and travel to the other enemies, damaging them as well. Homing rockets are slower firing rockets that have a moderate homing ability. Triple fire triples the firing rate of the standard ammunition used by the tank.

The armor pickup increases the current health by 20% (one hit point), or gives the player an additional life if the health bar is already full. The shield powerup grants the tank immunity to a single hazard – falling into pits or crashing into the sides of raised platforms still instantly destroy the tank. The extra life pickup gives an extra life and the money pickup awards an extra $10,000 to the total score.

The nuclear strike pickup destroys any all enemies and other harmful entities on screen, while the communism pickup harms the tank, depleting one hit point. The mystery pickup gives the player a random powerup.

There are four main missions, and a bonus fifth one, each taking place in a different country and each having increased difficulty from the last.

"Don't let the 120 degree heat and sandstorms stop you. Get that oil! It belongs to America. Move out!"
―Mission briefing

This is the easiest mission in the game. The background is a vast desert with many oil wells and the occasional oasis. The ground enemies are mechanical camels with a turret in place of the camel's hump. The flying enemies and bombers have an olive green and grey colour palette. The tank has to travel 100 kilometres.

"Well done, Soldier! Now time to kick some commie butt. Bring that oil back to the good ol' USA where it belongs!"
―Mission briefing

The background of this stage depicts a large concrete wall with barbed wire on top. Behind it, there are many cathedrals, which are based on St. Basil's Cathedral, and oil wells. The ground enemies are ushanka-wearing mechanical polar bears with a minigun strapped to them. The flying enemies and bombers have a red and grey colour pallet with the yellow hammer and sickle symbol. This is the only mission with no downed bombers. The tank has to travel 150 kilometres.

"Now to the far east. They're fierce fighters, so watch out! Bring it back home so we can burn it the American way."
―Mission briefing

The background depicts a large wall – the Great Wall of China, behind which there are oil wells situated on mountains. On some mountains, there are traditional Chinese houses with oil wells penetrating the roof. The ground enemies are pandas with tanks. The flying enemies and bombers have a green and grey colour palette with red stars. The pits are hidden until the tank comes close, after which the ground will crumble, revealing the gap. The tank has to travel 250 kilometres.

The ground before crumbling, revealing a pit.

"This is it. Our maple syrup drinking neighbors to the north got a bad case of sticky fingers. Take that oil back!"
―Mission briefing

This stage depicts a winter setting with houses, barrels of oil, and many oil wells in the background. The ground enemies are mechanical moose with guns, with the flying enemies and bombers having the Canadian flag livery. The tank has to travel 350 kilometres.

"Don't ask questions, Soldier, we found oil on the Moon! Get it before anyone else does!"
―Mission briefing

The background is the moon's surface with many oil wells scattered all around it. The ground enemies are all four types from the previous missions, but all of them wear spacesuit helmets. Flying enemies and bombers are different shades of grey. The tank has increased fire rate compared to the other four missions. This stage is infinite and the difficulty increases as the tank progresses, and only ends if the tank is destroyed or if the player quits the game.

There are five challenges available in this arcade game. Special T-shirts will be awarded to the player if they manage to complete them.

This challenge requires the player to finish a stage with seven or more lives remaining. This is only possible in missions II, III, and IV. The first mission does not include enough pickups (armor and extra lives) to make this possible, while the Lunar Finale is an infinite stage.

The easiest mission to try this on is mission II (Russia), as it is the easiest of the three and has a satisfactory amount of pickups. By avoiding damage, the player can pick up two health packs (which each grant an extra life if health is full) and an extra life, resulting in a total of six lives. The seventh life has a chance of being obtained through the mystery pickup present on the stage.

Completing this challenge awards the player the Invade and Persuade Green Tee.

He Who Controls The Oil

This challenge requires the player to finish the game with a score of at least $2,000,000. To achieve this, the player must reach the Lunar Finale, as it is not possible to end with this score before then.

Once this challenge is completed, the player is awarded the Invade and Persuade RON Tee.

These two challenges require the player to collect 88 oil barrels and kill 100 animals, respectively. Just like the previous challenge, these two can only be completed in the Lunar Finale and come naturally as the game progresses. The former challenge is completed at a distance of 525 kilometres, with the latter being awarded approximately at the same time.

This is the hardest challenge in the game. In order to complete it, the tank must travel a total of 3,474 kilometres in the Lunar Finale in a single run; this distance is the actual diameter of the Moon.

When the difficulty increase, the player can start jumping over ground enemies and shooting at a 45-degree angle. Quick-firing weapons, such as the plasma cannon and triple fire, should be used, while weapons, such as homing rockets, should generally be avoided.

This challenge is completed after roughly half an hour of gameplay; after completion, the player is awarded the Invade and Persuade Tour Tee.

After completing all five challenges, the standard tank is replaced with a golden version with the triple fire upgrade as standard. The player will also be awarded with a trophy shaped as pile of petrol barrels in the Arcade Trophy Case. A copy of this trophy will also be available in the player's Penthouse to be used as decoration.

Entering the Konami Code during the title screen will make it so each stage begins with 99 lives instead of only three. This locks the "Live Saver" challenge, meaning the player cannot unlock it during runs with this code active. The player also cannot save their score after losing all lives. However, all other challenges can still be completed.

The Konami Code for individual platforms is:

The game on a Retro Arcade Cabinet.

The game on an Ultramodern Arcade Cabinet.

The large quantities of oil barrels at the end of each stage. 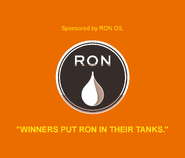 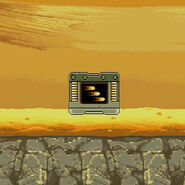 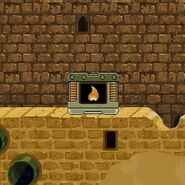 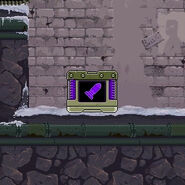 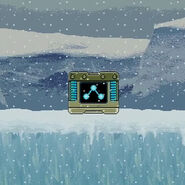 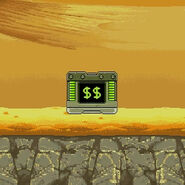 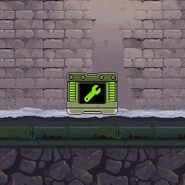 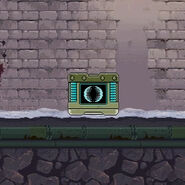 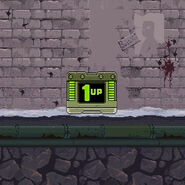 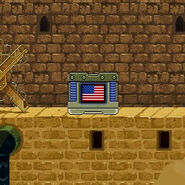 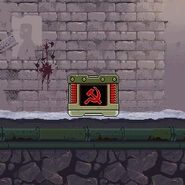 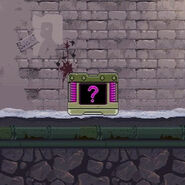 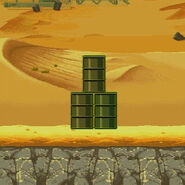 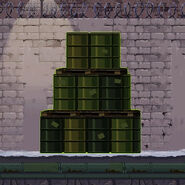 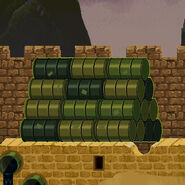 The increased fire rate of the stock cannon in the Lunar Finale.

Retrieved from "https://gta.fandom.com/wiki/Invade_and_Persuade_II?oldid=1237871"
Community content is available under CC-BY-SA unless otherwise noted.